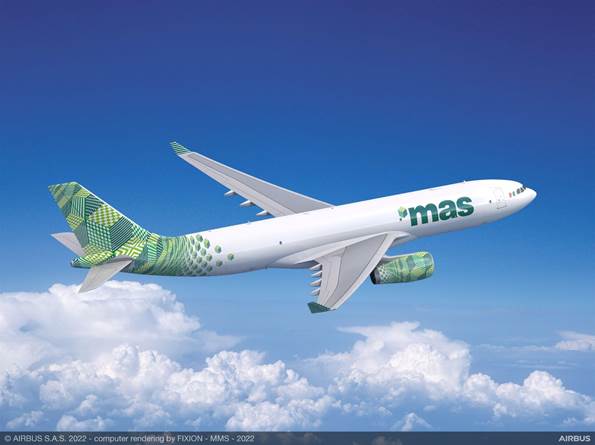 The first A330-200P2F of the Americas has been delivered to Aerotransportes Mas de Carga (mas) on lease from Altavair, making it the first airline from North and South America to fly the A330-200P2F.

With this converted aircraft by Elbe Flugzeugwerke (EFW), a joint venture between Airbus and ST Engineering, the cargo airline joins the Airbus family of operators in Latin America.

The A330-200P2F (passenger-to-freighter) is a member of the A330 aircraft family. The freighter can carry up to 61 metric tonnes and a range of up to 4,200 nautical miles, which will greatly enhance the cargo carrier’s expansion plans into new markets, including China, where it obtained certification to fly last year.

“We look forward to having mas join the Airbus family of operators in Mexico and experience the benefits of operating this freighter. The A330-200P2F will provide mas with a highly-efficient operation thanks to its greater payload and range capability. Its optimized fuselage cross-section offers flexibility to carry a wide variety of pallet and container sizes. Airbus is confident that the A330-200P2F will successfully support mas’ expansion plans,” said Arturo Barreira, president of Airbus Latin America and the Caribbean.

As a modern aircraft with advanced Airbus technology that includes fly-by-wire flight controls, the A330 offers a highly capable platform for conversion into a freighter. More than 1,800 A330s have been ordered, with over 1,500 delivered to date since the A330’s service entry in 1994 – providing a large source of aircraft to support the conversion programme for many years.

“mas will take advantage of the increased payload and range of the A330 to expand our global presence, increasing flights to Europe and South America and starting to fly into China. The A330P2F’s reliability and reduced environmental impact makes it the ideal aircraft for mas to succeed in the global cargo market,” said Luis Sierra, CEO of mas.