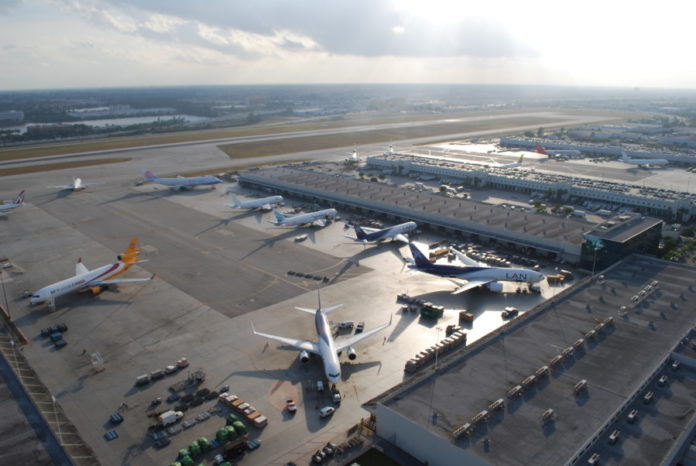 Miami International Airport (MIA) is the main gateway for perishables into the US and accounted for more than 64 per cent of all air imports last year.

The volumes of US fruit and vegetable Imports and US fish imports increased slightly in 2016 compared to 2015, while US flower imports slightly declined out of MIA.

The value of perishables to MIA and indeed to the US is huge and four of the top five import commodities through MIA by value were perishable products in 2016 with fish and crustaceans at $1.316 billion, flowers at $1.014 billion, vegetables and roots at $248.4 million and fruits and juices at $152.8 million.

Miami-Dade aviation department chief aviation for marketing, Jimmy Nares says in 2017 to date it is once again seeing good growth in the sector, but exact figures are not available.

He explains: “Our strongest perishable trade lane by far is with the Latin American and Caribbean region. And, most of this is comes in the form of imports from the South (primarily Central and South America).

“Some of our largest trade partners for perishables in terms of volume from this region are: Colombia (flowers); Chile (fish and crustaceans); Peru (vegetables and roots); and Ecuador (flowers).”

Nares notes it is seeing growth in various trade lanes especially in the transport of perishable products entering MIA that are then trucked north to the rest of the US and Canada.

“We are also seeing growth in perishables that enter MIA and that are then flown on to markets in Europe and Asia.

“A new project for MIA is Florida’s fist ocean-to-air program, where under a pilot program we are receiving perishables from Central America arriving at our two nearby seaports, which are then being transported to MIA for shipment to Europe by air,” he explains:

“We have measured success in this new venture, and hope to expand this program to additional points of origin in Latin America to new points in Europe and Asia,” Nares adds.

The top perishables groups moving through MIA by volume (tonnes) are fish and crustaceans (primarily salmon and tilapia), flowers and fruits and vegetables.

Perishable cargo is moved both by belly carriers and by freighters at MIA. Belly cargo carriers move about 18 per cent of the total, while freighters still transport the majority of tonnage, at 82 per cent.

While a multitude of passenger carriers transport perishables, MIA hub carrier, American Airlines, transports the most belly cargo, but by overall volume, most perishables at MIA are transported by the 41 freighter airlines.

Nares also explains MIA is seeing a growing trend in the transport of pharmaceutical products, and he says that these are increasingly perishable products that require temperature controls.

In 2016, nearly $4.4 billion worth of pharma was moved through MIA including $3.3 billion in exports and $997 million in imports. He notes that this level represents a 140 per cent increase since 2010.

MIA recently completed its planning phase for a major capital improvement project to prepare for future growth in its cargo operations.

The project, called Cargo Optimization, Redevelopment and Expansion Program (CORE), is a detailed, long-term plan to modernise the airport’s cargo operations and double its current capacity (from around two million tonnes to four million tonnes of cargo).

Nares explains: “The project aims at maximising the use of existing facilities and real estate; redevelop outdated, costly structures; and as needed construct entirely new cargo property. MIA does not invest in infrastructure for perishables, per se.

“Rather, its cargo airlines and cargo handling companies make improvements to the interiors of general cargo facilities that they lease from MIA.”

Network set to grow into the Americas

He also expects MIA’s network to grow into Central and South America and it is actively marketing MIA on two fronts, firstly through development of additional direct air service routes in order to increase capacity; and secondly via implementation of programs designed to expand the product line.

Nares adds: “For the latter, for example, we have a Perishables Logistics Road Show program where together with our US Federal Agencies travel abroad to conduct workshops with local growers/ shippers who export perishables to the US via MIA.

“These workshops are designed to address specific issues faced with importing into the US market, and to streamline the process, thereby increasing the volume of perishable imports.

“Upcoming road show workshops will be conducted in the Dominican Republic, 5-8 June, 2017, and again in Ecuador in early to mid-October.”

MIA looks a sure bet to continue being the perishables gateway of the US and indeed the whole of North America and is showing no signs of slowing down its growth.