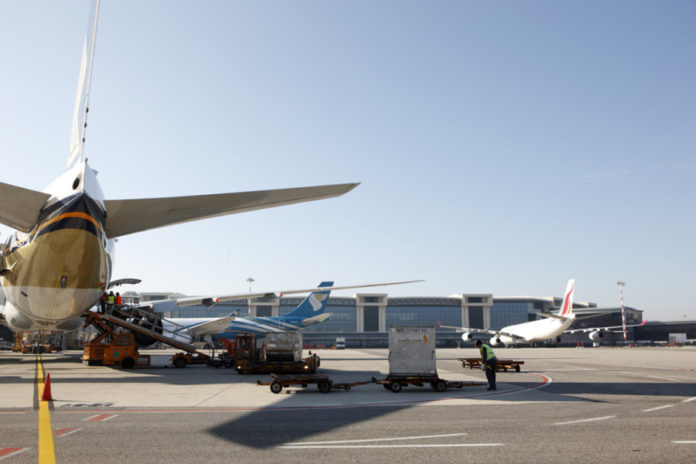 Despite seeing a small fall in cargo volumes in 2018, Milan Malpensa Airport remains the leading airport of Southern Europe.

Cargo was down 3% to 558,000 tonnes, with operator SEA Milano saying this reflects the general slowdown of the market, especially exports. It also highlights the grounding of Nippon Cargo Airlines’ fleet from June to October negatively affected capacity.

The decrease comes after four years of strong growth averaging 8% per annum. The slowdown has continued into 2019 though SEA says positive signals were emerging in March.

It says: “It is not easy to predict how the market will react but we are confident that the boost coming from pharma and e-commerce development would lead a recovery in the second part of the year.”

Handling over 50% of Italy’s air cargo, Malpensa is also the sixth busiest cargo airport in Europe. Luxury goods such as fashion and cars remain the main exports. Semi-finished products are important imports.

The airport operator says: “The strong performance of export flows during last years confirms that Malpensa is the world gateway for all the “top class” made in Italy products, sent all over the world according quality and reliability standards able to satisfy the most sophisticated needs of the final customers.”

SEA has been investing in facilities including pharmaceuticals. At Malpensa, Alha and BCube are both IATA CEIV certified. SEA says both companies are reporting strong growth in pharmaceutical volumes.

The airport says: “in Malpensa we saw a strong decrease in irregularities for pharma shipments, also minor ones have been reduced to very few cases in one year and a big increase in pharma volumes, about +30% in 2016 and +40% in 2017.”

New warehouses have also been going up, with two units being taken over by WFS and Beta Trans, adding 15,000 sq m of first line facilities. DHL is constructing a 50,000 sq m hub, due to be completed by mid-2020 to end first-line facilities of the Cargo City. SEA is negotiating with several freight forwarders for second-line warehouses inside the airport grounds. An area of 125,000 sq m has been made available where about 60,000 sq m of building can be built.

SEA says: “The new buildings are expected to be available at the beginning of 2021. The complex of “first line” cargo infrastructure, combined with the availability of “second-line” warehouses will bring the total capacity of the airport from the current 650,000 tonnes / year, to over one million within the next 2-3 years.”

As a country, SEA says that Italy is ranked 51st in the World Bank’s Doing Business 2019 report but when it comes to the Trading across borders indicator, it is ranked first due to logistics facilities, motorway services and ro-ro ships.

SEA says: “As for the air cargo, Milan Malpensa airport, which manages 55% of the air cargo processed in Italy, provides services of absolute excellence, comparable with the best performance of the major European cargo hubs.”