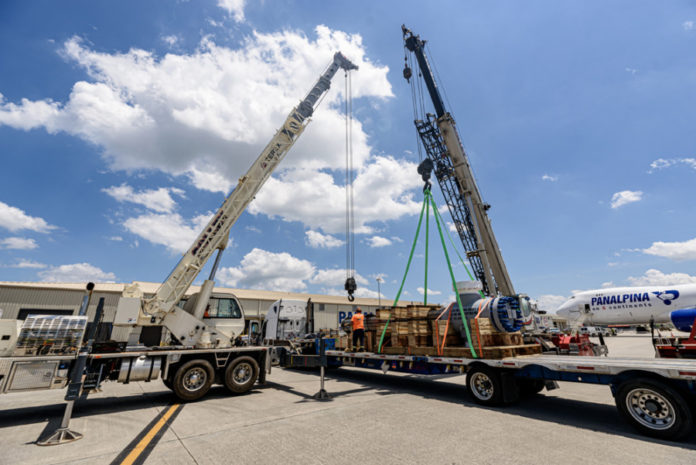 Panalpina proved it was the star of Africa by moving four heat exchangers from the US to Angola for a deep-water oil platform.

The planned maintenance for the customer’s platforms in Angola was entirely dependent on the arrival of four heat exchangers from a supplier in Louisiana.

All four pieces had to be on the platform by 28 May to avoid significant production losses, so the customer contacted Panalpina in September 2018 to begin making plans.

The two smaller heat exchangers weighing seven tonnes each were ready first and securely packed and shipped out on 7 May from Houston, Texas via Panalpina’s African Star air and ocean freight solution.

The two larger exchangers, each weighing over 16 tonnes, time was more critical because they were not completed and available for pick-up from the supplier until 19 May, with the delivery deadline of 28 May.

Panalpina’s engineering team, along with the Atlas Air loads team continuously redesigned the shipping skid and pallet tie-down in the 10 days prior to ensure safe and compliant transport.

On 19 May, Panalpina representatives were on-site at the supplier facility before sunrise to begin packaging the units, with the truck heading for Huntsville in the evening.

The aircraft departed on 10.15pm en route to Liege Airport in Belgium, arriving in the early hours with Panalpina staff monitoring the transfer for the flight to Luanda.

On 24 May, all items were transferred from the aircraft onto trucks via onsite cranes in Luanda for transport to the Sonils dock.

The customer supply vessel picked up the heat exchangers and took them to the platform for installation on 26 May.

Matthias Frey, global head of the Panalpina Charter Network says: “With only seven days to deliver such fragile and critical components, the trust the customer put in our team was immeasurable.”