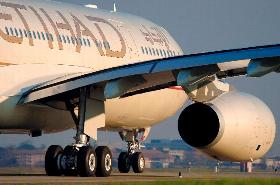 Etihad Airways is reaching further into the Asian market through a strategic deal with Philippine Airlines (PAL).

In terms of air cargo, the airlines have signed a letter of intent for an extensive capacity agreement based on the bellyhold of all services between Abu Dhabi and Manila, as well as connecting airfreight into Africa, Australia, the Middle East and South East Asia.

The airlines will work on the joint development of value-added cargo products such as priority and pharmaceuticals across their combined networks. Initially, the partners will place their respective PR and EY codes on each other’s Manila-Abu, Dhabi flights to operate a combined total of 19 weekly flights between the two capitals.

Etihad will also place its EY code on Philippine Airlines (PAL) flights from Manila to 20 destinations throughout the archipelego, increasing to 28 during 2014.

Etihad Airways’ president and chief executive, James Hogan, says: “What is particularly significant about the new commercial arrangements is that our millions of customers are the winners. From a greater choice of passenger and freight codeshare destinations, to reciprocal loyalty programme benefits, and more efficient terminal operations, this is a truly customer-centric proposition.”

PAL president and chief operating officer, Ramon Ang, says: “This new agreement is one of the ways by which PAL hopes to further build its global network.

“By harmonising our products, we get to offer our passengers much wider and better travel options all over the world while boosting economic activity for both our countries through trade and tourism.”