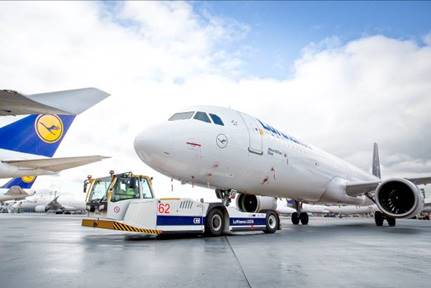 The PHOENIX E is the flagship model among Goldhofer’s towbarless aircraft tractors. It is a powerful performer, offering speeds of up to 25 km/h for maintenance towing. It also has the versatility to handle the full range of today’s aircraft up to a maximum take-off weight (MTOW) of 352 tonnes (Boeing B777/Airbus A350), approximately 80% of all aircraft movements at the airport. This makes the PHOENIX series one of the biggest-selling tow tractors on the market. Goldhofer has succeeded in developing a battery-powered version that delivers the same performance as the equivalent diesel model.

The zero-emission, sustainable-operation tow tractor boasts the same range of performance in terms of tractive power, maneuverability and reliability as the diesel version, and offers additional advantages such as lower operating costs and longer maintenance cycles. With its modular battery concept, the PHOENIX E has a battery capacity of 66-165 kWh depending on operational requirements. A hybrid solution with a range extender powertrain is also available.

The first three months of ground handling with Lufthansa LEOS have generated a mass of operational data, and initial conclusions can already be drawn on the suitability of the Goldhofer electric tractor for everyday use. “Not only the drivers but also the mechanics in the hangar, for example, are excited about this vehicle,” says Peter Unger, CEO of Lufthansa LEOS. “The results to date indicate savings in excess of what we had expected and planned.”

The PHOENIX E works up to 10 hours a day and handles up to 20 tows without any loss of power. That is all thanks to the IonMaster Technology employed by Goldhofer: a highly efficient and powerful electric drive concept with 700 V lithium-ion batteries from Akasol. In addition, the TMS system (Thermal Management System) that is part of the IonMaster concept maintains a constant battery temperature between +15 and +40°C for an up to 25% greater range and longer battery life. The dedicated charging infrastructure developed and installed by ABB allows for fast and opportunity charging so that the vehicles can complete their long working days without any loss of power.

“The data available show that we can perform more tows than assumed in the simulations. Our expectations have been exceeded by far, and we are planning to acquire another PHOENIX E at the end of the year,” says Unger.