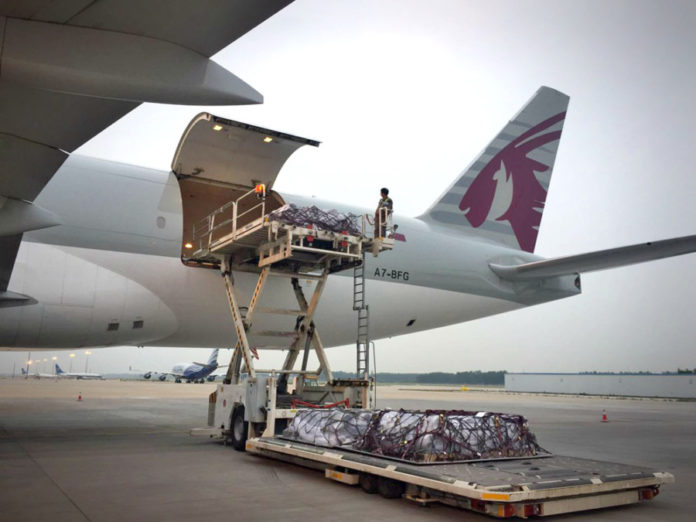 A double first for Macau and Qatar Airways with the Special Administrative Region of China seeing the start of Qatar Airways Cargo twice weekly flight which also marks the commencement of QR’s transpacific freighter services.

“The carrier’s Boeing 777 freighter operates twice a week from Doha to Macau. From Macau, it departs across the Pacific to Los Angeles and Mexico City. On the return leg, the freighter flies over the Atlantic to Liege before arriving at the carrier’s hub in Doha. One hundred tonnes of cargo capacity is offered on each flight leg,” the carrier said in a statement.

Macau is well placed to pull in business from nearby Hong Kong and the increasingly sophisticated manufacturing sectors of Southern China.

Helping matters here is the Hong Kong-Zhuhai-Macao Bridge (HZMB) a 55-kilometer-long bridge-island-tunnel complex across the Pearl River Delta, which will make it easier to move goods between the Hong Kong, Southern China and Macau. It is due to open next week but there is speculation use of the facility might be delayed, media in Hong Kong reported.

QR has been candid about the markets it aims to tap. “China and the Americas are key markets for Qatar Airways Cargo, with many of the major industrial and manufacturing centres in the Guangdong province of China located on the West/Macau side of the Pearl River Delta,” said its statement.

Electronics, garments and e-commerce goods will be the major commodities moved out with consumer goods the major import, it added.

“We have launched our newest freighter destination, Macau, just in time for the holiday season when air freight demand is high and the market is strong. The new services will connect manufacturing industries and exporters from the region to North America directly and quickly, without requiring a stopover at our hub in Doha,” Qatar Airways Chief Officer Cargo, Guillaume Halleux, said.