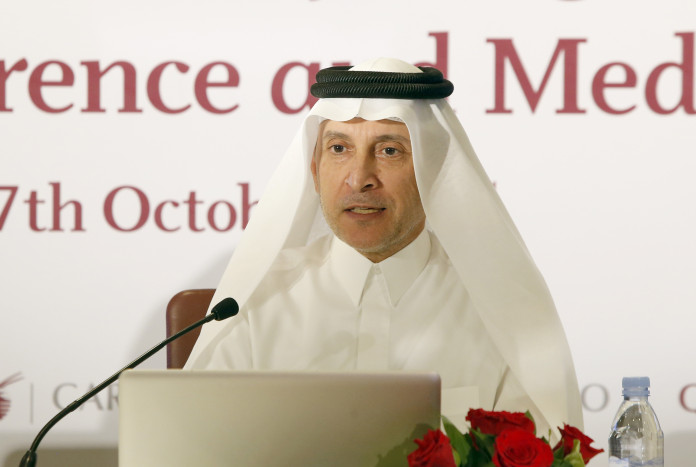 He says according to the International Air Transport Association’s freight tonne kilometre statisitcs for July, the Qatari carrier has moved into third spot in the rankings.

“Being in the top three international cargo carriers in the world reflects the hard work and commitment Qatar Airways Cargo team over the past five years. Our cargo capability is a major component in driving our group success and growth and it will remain a focus of our expansion in the coming years,” Al Baker explains.

The carrier is fast approaching being the leading cargo carrier in the world and Al Baker says a second freight terminal at Hamad will be built, with a target completion date of 2018.

This two-storey facility will have capacity for three million tonnes of cargo, cover an area of 110,000 square metres, and give Qatar Cargo an overall cargo capacity between both its terminals of 4.4 million tonnes. Al Baker adds Qatar Cargo may also expand its cargo terminal space further, depending on the need and demand.

More specialist services have also been launched to tap into opportunities in particular market segments, adding to its QR Fresh and QR Pharma services.

QR Equine has been launched to transport horses, and will see them handled through the carrier’s dedicated Live Animal facility at Hamad. Qatar has a rich equestrian history and passion for horses.

Meanwhile, QR Express has been set up in response to the rising drive in e-commerce and Al Baker says the carrier wants to tap into the “lucrative” express freight market, which gives opportunities of high yields and high margins on cargo.

Al Baker adds it may take further options it has on both freighter types and its freighter fleet will reach 21 by 2017.