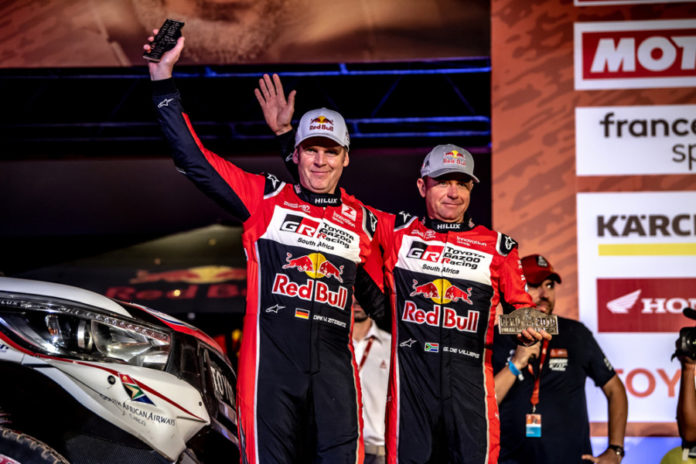 The two cars, weighing about two tonnes, were seamlessly transported along with spare parts to Sao Paulo, Brazil en route to Lima, Peru by SAA Cargo.

Each car takes about three hours to disassemble and about six hours to reassemble, and were designed in line with size restrictions for commercial cargo holds.

They were built in such a way that they could be disassembled to the size of a cargo pallet and container to be used.

The race took place from 6 to 17 January across 10 long and gruelling stages in southern Peru, and tests vehicle durability, driver endurance and technical ability to the limit.

Glyn Hall, team principal of Toyota Gazoo Racing South Africa says: “Winning the Dakar Rally has been our goal from the start. Now that we’ve achieved that goal, it is clear that South African technology and design is not only good enough to compete at the highest levels, but also to win.”

Justice Luthuli, acting general manager of SAA Cargo says: “We are elated that Toyota have continued to entrust us with the responsibility to transport their vehicles.  We are also very proud of the association with the winning team.

“We congratulate Toyota Gazoo Racing South Africa for their outstanding finish at the world’s most gruelling off-road race.  The Team has lived up to expectations and represented our country with pride despite the many challenges faced in some of the stages of the race.”