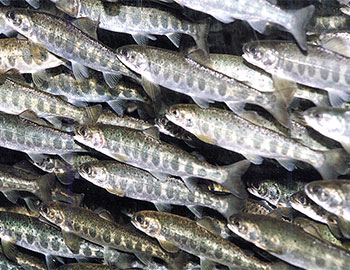 The last of some 38,500 live salmon parr fingerlings, which have been successfully transported in 42 bin movements over a five-month period, have reached their destination in Dubai.

Thanks to Australian manufacturer FloatPac’s airfreight oxygen delivery system, the salmon undertook a five-hour road journey to Glasgow airport, 7.5 hour flight to Dubai and Customs clearance – culminating in a transit period of, on average, 20-26 hours – in perfect safety.

In a company blog, FishPac says: “Of course our objective was to deliver fish in the best possible condition, without compromising their future growth potential, and that was achieved without a hitch.

“In order to ascertain practical payloads, our customer completed successful pre-shipment trials with 40g fish in Scotland. Based on these trials, initial shipments were undertaken at 70kg per cubic m per bin, however further shipments were undertaken at the lower density of around 55 kg per cubic m per bin once conclusions were made on the initial shipments.”

As land-based salmon farming becomes more popular, the need for sound transportation of live salmon at all life cycles is becoming increasingly important. Now that the company has completed the stocking of a large re-circulation aquaculture farm in Dubai with fingerlings, it is ready for the next phase of growth within this area of the business.

“The salmon growth rate and survival in the farm has been within expected ranges and the transport exercise has been marked up as a huge success! Given our recently announced agency deal for Europe and the UK with Norwegian company Lipfish, this latest project is the next step in an exciting and fast-moving global growth strategy,” says the blog.

The patented FishPac live air transport system was created as an alternative to water-filled plastic bags packed in Styrofoam boxes and air pump systems. These traditional methods of aquatic transport were not only labour intensive but also were environmentally toxic and yielded high mortality rates amongst the aquatic cargo.

FishPac’s innovative in-container oxygen system reduces fish stress levels and lowers mortality rates from more than 50 per cent to less than one per cent per payload, claims the Victoria, Australia-based company.