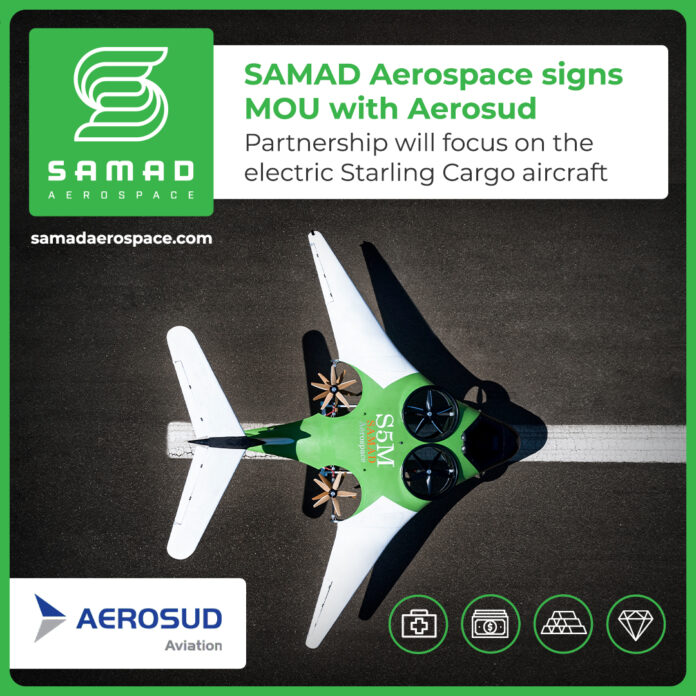 SAMAD Aerospace has announced that it has signed an MOU agreement with Aerosud Aviation for the development and manufacturing of its fully electric VTOL Starling Cargo aircraft.

The Starling Cargo aircraft will be remotely piloted with auto pilot capability. It will have a cruising speed of 83 knots, flight ceiling of 10,000 feet and a range of up to 117 nm. The electric vertical take-off and landing aircraft will enable flexible point to point air cargo of up to 60 kg payload.

Rob Jonkers, director of programmes at Aerosud Aviation, added: “We look forward to working with SAMAD Aerospace to bring to market this unique Starling Cargo eVTOL, which has particular advantages in the South African and African context given sparse infrastructure to move cargo at medium to long distance at speed. The flexibility of Starling Cargo operations will bring a new dimension to delivery turnaround times country and continent wide”

The SAMAD Aerospace team have seen interest in its Starling Cargo aircraft from a number of industry sectors that need to transit high value cargo.  These include oil and gas corporations, gemstone mining companies, medical logistics and emergency response companies.

The Starling Cargo aircraft will also be utilised to deliver humanitarian critical cargo of food, medicine and equipment to often remote regions of the world with underdeveloped or damaged local infrastructure.

SAMAD Aerospace is now one of the top ten VTOL companies in the world.  It has built and tested multiple prototypes of its eVTOL aircraft.