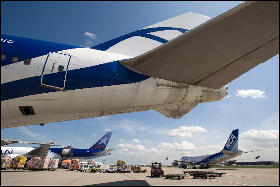 Amsterdam Airport Schiphol handled 134,350 tonnes in June, down from the previous three months of May, April and March.

Schiphol’s cargo senior vice president, Enno Osinga says: “These figures are clear indicators that the European air cargo market is stabilising, and returning to moderate growth. Freighter operations have grown again, but by less than the increase in total traffic.”