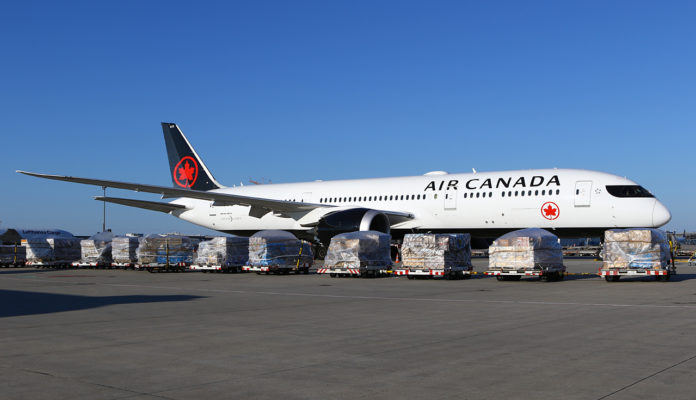 “For the first time ever, our cargo revenues exceeded passenger revenues in the quarter,” said Calin Rovinescu, president and chief executive officer of Air Canada. “Over the course of the pandemic and through the second quarter we’ve continued our focus on airfreight to meet immediate and exceptional demand for medical equipment, critical goods and the regular movement of time sensitive air cargo.”

Since March, Air Canada Cargo has operated over 2,000 cargo-only flights across a global network that includes cities in Europe, Asia, South America, the United States as well as New Zealand and Australia. Cargo-only flights represented 38% of all widebody flights in Q2 2020, representing more than 40% of total cargo revenue.

Air Canada was among the first passenger airline to reconfigure widebody aircraft for transporting cargo in the cabin by removing the seats in the passenger cabin of for Boeing 777-300ER aircraft. These modified aircraft began flying just ten days after the required certifications and permissions were obtained. Three A330 aircraft were later modified. All seven aircraft currently operate on international routes, with PPE, mail and perishables loaded in the cabin.

“This rapid transformation of our aircraft to meet cargo demand reflects our ability to quickly pivot and adapt to the changing dynamics of the industry while maximize the needs of our fleet,” said Rovinescu.

Air Canada Cargo has also worked closely with its freight forwarding customers to provide ad-hoc on-demand flights to fill specific capacity requirements. It has continued to provide road feeder access to its global network from airports in the United States including ORD, JFK, LAX, SFO, PDX and SEA.

“All of us at Air Canada are incredibly grateful to our customers for allowing us to serve them in ways we never anticipated in the midst of this global disaster,” said Air Canada Cargo vice president, Tim Strauss. “Equally, we are proud of the teamwork, creativity and focus of our employees around the world who have given their very best every day and allowed us to grow a North America best 52% year over year.”