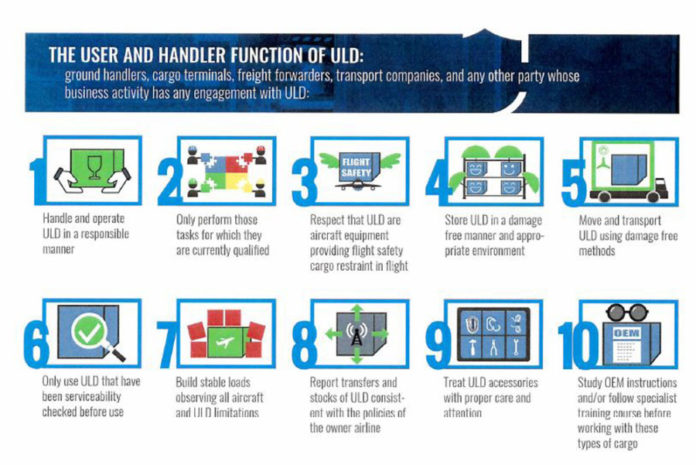 ULD Care has launched an online process to allow industry organisations to sign up to the ULD Care Code of Conduct, a voluntary set of principles to ensure proper handling.

The association representing owners, operators and suppliers of ULDs says the practice of outsourcing ground and cargo operations to third party service providers has moved the majority of ULD handling and operations outside the directly regulated environment in which most airlines operate.

ULD Care vice president, Bob Rogers says: “A common sight on most airports, ULD are the unspoken hero of the air cargo industry, facilitating the movement of millions of tons of air cargo carried by the world’s airlines each year.

“Yet all too often, ULD don’t receive the respect they require, respect that is particularly essential when recognising that ULD are aircraft equipment whose primary function is to provide flight safety by securing cargo in its allocated location on the aircraft during all phases on flight.”

Rogers says the Code of Conduct puts in place simple operating guidelines that will lead to safe and sustainable ULD operations and handling.

The code is voluntary and free of charge, relying on the commitment of its signatories to live up to its principles.

Rogers says: “As a not-for-profit industry body representing the interests of the ULD owning community, ULD CARE believes that the Code of Conduct, along with its three supporting functions, the book ULD Explained, online learning modules ULD Instruct and a new tracking pilot project ULD Connect, can foster a new awareness of the importance of well managed ULD operations and handling.”