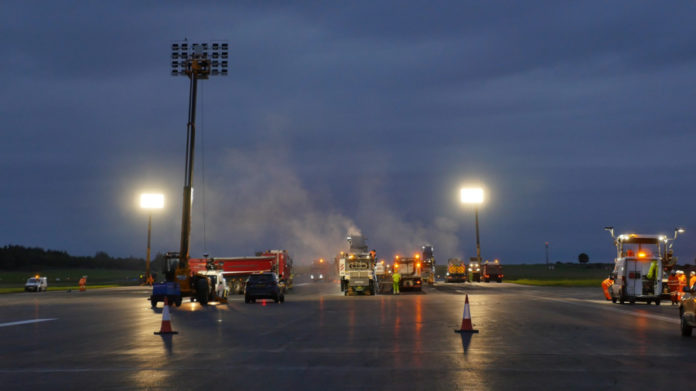 Ireland’s longest runway at Shannon Airport is being upgraded this week and proving a triumph of logistics as the equivalent of one football pitch is re-laid between dusk and dawn each night, the airport has revealed.

Shortly before midnight, following the last arrival/departure at Shannon, a team of 90 vehicles and 70 people roll in for over four hours work on the 3,200m runway – among the longest runways in Europe and one of the designated emergency runways for the Space Shuttle prior to cessation of flights.

By the time they finish and get ready for a 90 minute health and safety inspection – before early morning flights resume – the team will have laid enough asphalt to cover an entire football pitch. 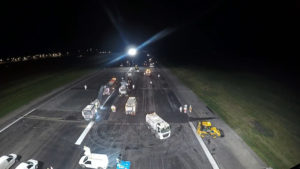 The work will see the runway right for the next quarter of a century, commenced in April and by the time it finishes in October, some 50,000 tonnes of asphalt will be laid – equating to 72 football pitches.

Shannon Airport managing director, Andrew Murphy says the project is part of an overall €20 million plus programme at the gateway.

The airport’s runway, built in 1961, was last fully rehabilitated in 1983 and has under gone regular maintenance over the intervening years.

The current work includes resurface and rehabilitation enhancements to Runway 06/24, including replacement of existing runway lighting and fittings, raising of the drainage channel, reinstatement of the airfield markings associated ducting and other minor site works.

According to traffic figures published by the Airports Council International (ACI) Europe, Shannon Airport handled 1,095 tonnes of cargo in May, a year-on-year (YOY) increase of 7.4 per cent. In the first five months of 2017, it handled 5,619 tonnes, a YOY rise of 17.7 per cent.