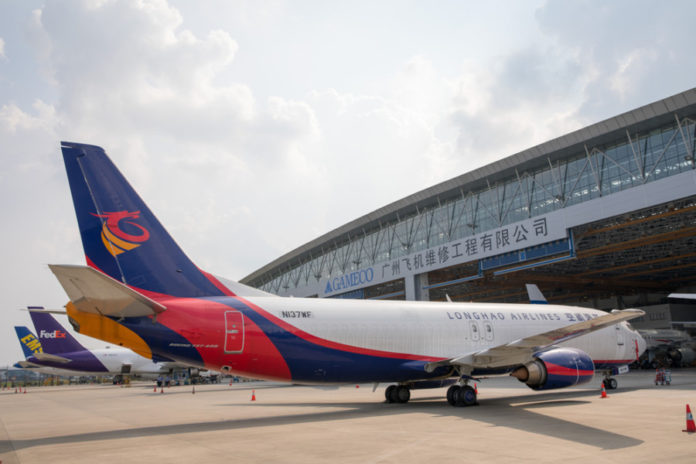 Vallair has delivered the first Boeing 737-400 Freighter to Guangdong Longhao Aviation Group, to be operated by Guangzhou-based Longhao Airlines.

The aircraft, MSN27916 was previously operated by Japan Transocean Airlines and converted at Gameco in Guangzhou under a Pemco supplemental type certificate (STC).

The group operates 737-300Fs using its own fleet as well as leased aircraft, operating freight services on domestic and international sectors including Hong Kong, Macau and Taiwan.

Longhao Airlines was established by Guangdong Longhao Aviation Group with a registered capital of $61.6 million, launching operations in March 2017 with services between Guangzhou and Nantong.

The aircraft is one of a number of 737s purchased by Vallair for cargo conversion, and the first 737-400 to be converted at Gameco’s facility.

Gameco chief executive officer, Norbert Marx says: “Since entering our co-operation with Pemco, Vallair is our first customer for cargo conversion under the Pemco STC in Guangzhou. Our technical team has worked closely with Vallair’s cargo conversion specialists to ensure that Longhao has the optimum aircraft for their needs.”

Vallair head of cargo conversions, Peter Koster adds: “As these mature aircraft come to the end of their operational lease agreements we are extending the life of these assets in the most economically beneficial way through our cost-effective conversion programme.”

Pemco World Air Services designed the STC and has extended its presence in China by adding Guangzhou to the map of conversion sites.

Mike Andrews says: “The assignment of freighter conversions to our new partner Gameco has proven to be a valid choice. Quality and efficiency are key drivers for conversion programme and Gameco delivered excellence for Vallair via their highly skilled workforce.”