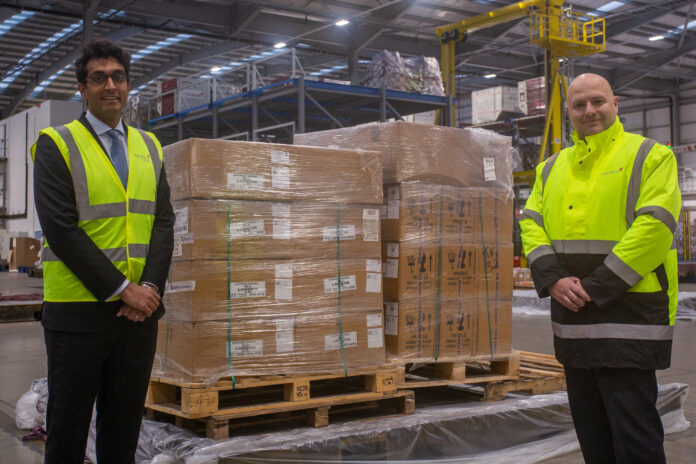 Over 20 tonnes of vital medicines, has left the UK heading for Pakistan where it will be distributed to victims of the recent flooding disaster and resulting humanitarian disaster.

The medicines, donated by Bestway Group is being flown to Islamabad by Virgin Atlantic Cargo who is transporting the medication.

The medicines will be landing on the ground tomorrow (24.11.22), to help the 3.2million people who have lost their homes and livelihoods and been displaced by the flooding which left more than a third of the country under water, and damaged more than 4million acres of crops.  Ongoing heavy rains are continuing to complicate rescue and recovery efforts and disease has been widespread as the humanitarian disaster increases.

“Our teams are on the ground in Pakistan and are seeing first-hand how desperately these medicines are needed to help combat disease that has taken hold where fresh water supplies have been destroyed and families have lost their homes along with everything they own,” Haider Choudrey, Chief Financial Officer of Bestway Group, said. “We would like to thank the team at Virgin Atlantic Cargo who has helped us make this happen and are transporting what is a sizeable cargo of medicines out to where it is needed the most”.

Virgin Atlantic Cargo is one of the leading players in the global cargo industry and played a vital role in the airline’s survival following the Covid-19 pandemic, keeping global supply chains running and transporting essential goods around the world. On 21st March 2020, the first ever cargo only flight in Virgin Atlantic’s history took to the skies and over the next 12 months, the airline’s cargo business went from strength to strength operating over 5,000 cargo-only sectors, launching 12 new routes as well as carrying over 8.5 million kilos of PPE and essential equipment for the NHS.

Now, the airline’s essential assistance will facilitate the delivery of the much-needed aid to the most vulnerable with the onset of the winter season in Pakistan.

Virgin Atlantic dedicated special climate control vehicles for the collection and delivery of the medicines to its cargo handling facility at London Heathrow.

“We are deeply saddened by the humanitarian disaster that has unfolded in Pakistan following the recent flooding,” Phil Wardlaw, Managing Director of Virgin Atlantic Cargo said. “We are so grateful to have been able to partner with The Bestway Foundation and Well Pharmacy to ensure these important medicines reach those in need and will continue to use our business as a force for good in these devastating times.”

“We couldn’t be more thankful to be able to support in delivering these vital medicines to the victims of the humanitarian crisis in Pakistan and would like to take the opportunity to thank the Bestway Group for their donation,” Ben Crump, Head of Cargo Operations at Virgin Atlantic Cargo, added.

Bestway Group continues the efforts of its Pakistan Flood Relief Appeal, for which it has raised over $2.5 million. Through its charitable arm, Bestway Foundation, it is overseeing the distribution of ration bags, blankets, mosquito nets and water filtration units to over 20,000 families in the worst affected areas of southern Pakistan provinces of Baluchistan and Sindh.

The Bestway Foundation has donated more than $46million to notable causes since its formation in 1987.  It operates in the UK and in Pakistan and is focused predominantly in the areas of education and healthcare as having the great impact on social mobility and advancement.