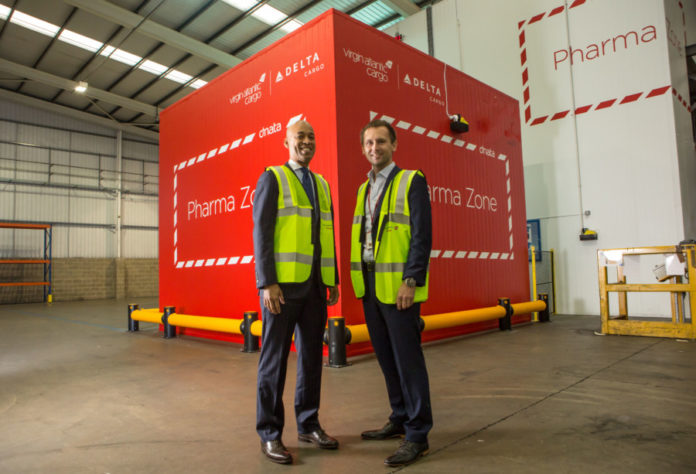 The facility was opened in September and developed in response to customer requirements and to support the growing pharmaceutical volumes moved by both and to capture further pharma business on the world’s busiest pharma trade lane – the US to the UK.

Among innovative features are walk-in pods to maintain 2-8°C and 15-25°C temperature ranges for loose pharma shipments, a temperature-controlled storage system for 24 pallets with six separate chambers, and a dedicated cargo door to speed up the flow of shipments through the warehouse.

Speaking to Air Cargo Week as part of a media tour at the Pharma Zone, Virgin Atlantic Cargo managing director, Dominic Kennedy (pictured above right) says the new facility, coupled with the growing ties will drive pharma freight for both and bookings are already up for pharma traffic at Heathrow. 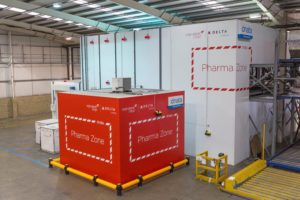 “We are well positioned with the amount of capacity that we collectively offer and we are now just short of a quarter of capacity, which is either a Delta or Virgin aircraft,” Kennedy explains.

In the first half of this year, Kennedy says Virgin’s pharma tonnage grew by 20 per cent and he expects this to increase as it continues to invest in, and develop, facilities like the Pharma Zone as well as GDP processes and training across the network.

Joining Kennedy at Heathrow was Delta Cargo vice president, Shawn Cole (pictured above left) who says the new facility will help grow its pharma traffic into Heathrow and on the trade lane.

He says the dedicated pharma facility at Heathrow is an important addition to its global pharma network and, most importantly, provides customers and pharma manufacturers access to another major international gateway.

Cole notes the power of the partnership of being co-located in London, but also in Atlanta, JFK and Boston, is that both carrier can jointly highlight the “uniqueness” of both brands which will drive pharma business. 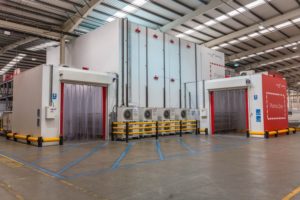 Cole adds: “Both brands are complementary and we have a lot of commonality in how we can harness that as a value proposition and that is what we have with the Pharma Zone and we are constantly learning from each other to better improve to safely and securely move freight from point A and point B.”

He says in Atlanta, Delta recently improved its pharma offering and although it is nothing quite as innovative as at Heathrow, further pharma facility investments at other US hubs is something Delta is looking into for high demand lanes.

Kennedy says Virgin is on track to gain Wholesale Distribution Authorisation (WDA) certification in the UK by the end of the year to confirm its GDP compliance.

In July, Delta was awarded IATA CEIV Pharma certification corporately and at its Atlanta operational hub and it is looking to gain CEIV at more if its US hubs.

Cole notes: “CEIV is something we challenge ourselves to achieve and we are the only US carrier to have that and something that the customers wanted as well.

“It is quite rigorous to get that certification so the team focuses on what we need to do to improve processes across the board. We achieved that in Atlanta and the goal is to get it in other places as well starting with JFK and Los Angeles.” 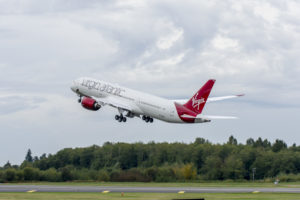 Delta and Virgin are co-located and operate warehouses under ‘one roof’ at Heathrow, Boston, JFK and Atlanta and Kennedy says it is definitely looking to expand this concept in the future.

He adds: “Delta provides handling for us in other stations and we are handled by Delta in Seattle. It is something we constantly review, but there are in some cases unfortunate physical constraints such as warehousing capacity but it is something we are committed to with an aspiration of being one roof in North America.”

On co-location, Cole says it is all about how the carriers can focus operationally and commercially to make sure processes are integrated. He notes they are always looking to learn from each other to seamlessly deliver what the customer wants.

“We are quite happy with the one roof concept and see a lot of value in continuing to strengthen that,” Cole adds.

More joint cargo projects could also be on the horizon in the future and Kennedy says cargo teams from both carriers have been talking regularly over the last few months about what the next phase of the partnership will look like. 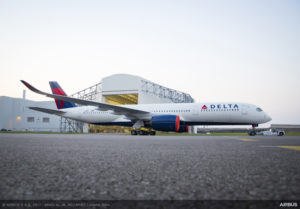 “It is really exciting and next year it will see us moving closer to achieving ultimately metal neutrality so we are thinking about how we can cross-sell, remove seams, align our products and achieve a seamless customer proposition, which is one of the main strategic focuses in the next year,” Kennedy says.

Cole echoes Kennedy’s thoughts and says both are looking to “break apart the value chain” to create more value in the partnership to benefit the customer, which “ultimately what it is all about”. He adds: “We want to make sure we are listening to them.”

Cole adds: “One of things customers I have talked to and they asked about was Delta that has a vast network, but with our equity and JV partners what are we doing to activate them and Pharma Zone here shows that. We are going to deliver through our partnerships across the board.”