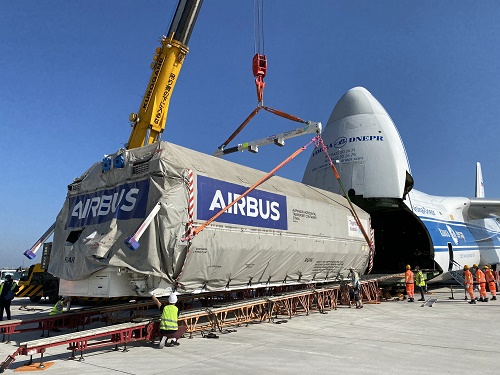 Volga-Dnepr Airlines has organised delivery of the world’s largest and most sophisticated commercial communications satellite – Inmarsat-6 F1, also known as I-6 F1, from Toulouse France to Kitakyushu, Japan aboard its An-124-100.

The challenging and complex delivery was completed in close co-operation with Bolloré Logistics Space desk located in Toulouse, France, Volga-Dnepr’s long-standing partner across various industries, with both teams starting initial project discussions back in 2019 and operations planning in September 2021.

Even though the total cargo weight was not an issue as it did not exceed 70 tonnes, the dimensions of the satellite container was close to cargo compartment sizes. Given Volga-Dnepr’s previous experience when it delivered CTH04 satellite container before the loading and offloading procedures went intact. The company’s technical crew assisted on-site to guarantee that everything went smoothly and orchestrated the loading process which was accomplished with the usage of both internal and external cranes.

Designed and manufactured by Airbus Defence and Space, the satellite will serve a variety of purposes including decreasing costs for mobile services and IoT applications thanks to its hybrid nature as it features both L-band (ELERA) and Ka-band (Global Xpress) communications payloads.

The arrival of An-124-100 with I-6 F1 aboard was welcomed by Hiroshi Imanaga, Deputy Mayor of City of Kitakyushu, TSUJI Tomoharu, chief executive of Seaport and Airport Bureau, City of Kitakyushu, and Dmitry Vorontsov, Volga-Dnepr Group director, APAC development who visited site for an inspection and thanked all the teams for their great job and contribution to the development of the aerospace sector.

Dmitry Vorontsov, Volga-Dnepr Group director, APAC development, highlights: “Not only does the completion of I-6 F1 logistics project strengthens our footprint in aerospace sector but it also brings our cooperation with Kitakyushu City Government/Fukuoka Prefectural Government to the next level as we see real actions aimed at enhancement of air cargo infrastructure in the airport to be able to handle such complex shipments. This year we have seen a significant increase in the aerospace sector amid the revival of industry projects and the development of regional space programmes. Volga-Dnepr Airlines has so far transported over 3,000 tonnes of aerospace associated cargo and expects more projects in the pipeline.”