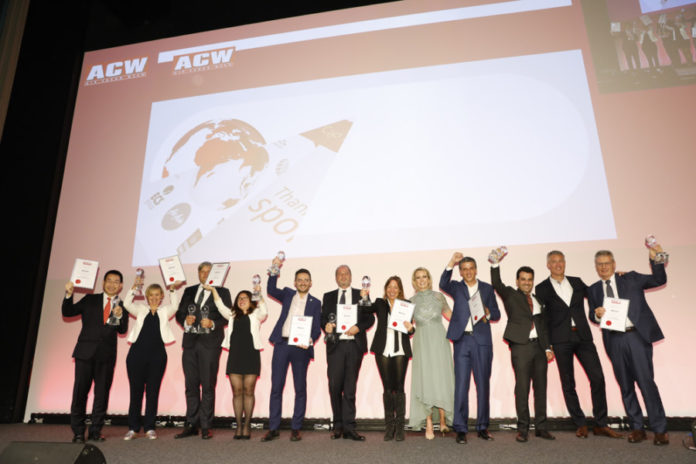 In a second change to the proceedings, more than 10,000 voters worldwide had cast their votes in a new format where a shortlist was developed and then voted on.

In a packed ballroom at the four-star downtown Munich hotel The Grand Westin, award winners, supporters and the elite of the global airfreight industry watched as winner after winner took to the stage to pick up a trophy for winning a hotly contested category.

The audience of the awards had left the sweltering heat of the Messe Muenchen venue of air cargo Europe to enjoy the air-con of the ballroom at the hotel to enjoy the evening on the middle day of the four-day event.

William Carr, chairman of AZura International, publisher of Air Cargo Week and host of the ACW World Air Cargo Award gala night, took to the stage just before the last category was announced to thank sponsors and voters for making the event the success it was.

He said: “I want to thank the sponsors who have donated so generously to the event and made it all possible. I also thank the voters around the world for taking the time to vote.”

Another tradition is that the event’s results were placed in the last AZura International’s ACW Daily News issue of the show by production manager Alex Brown who worked closely with the official photographer well past midnight.

Brown had laid out the rest of the publication earlier in the day and concluded the design of the Daily News by dropping in the winners’ photos as soon as they were downloaded.

Paris-based GSA ECS Group managed the double by picking up awards for Air Cargo General Sales Agent and the Industry Marketing & Promotional Campaign Award as well as introducing the winners of its global search for new airfreight talent to the industry.

Adrien Thominet, CEO of ECS Group, took to the stage to introduce a short film that encompassed the world-wide interest in the competition.