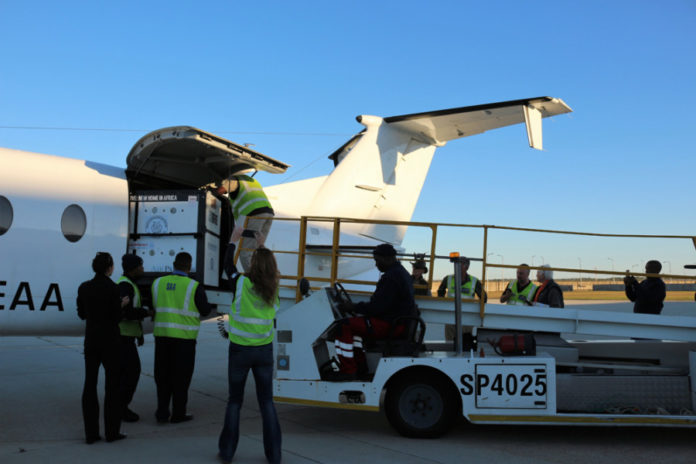 Air Partner has successfully relocated its own lion king, flying him to his new kingdom in South Africa on behalf of the Born Free Foundation.

The lion cub, King, was discovered in a Paris apartment in October last year, where he had been kept illegally as an exotic pet and neglected by his owner.

Since then he had been living temporarily at Natuurhulpcentrum rescue centre in Belgium until a new home was found at Born Free’s Big Cat Rescue Centre at Shamwari Private Game Reserve in South Africa.

Air Partner was tasked with transporting the cat from Johannesburg to Port Elizabeth on a chartered aircraft, from where he made the hour-long journey to Shamwari.

The freight team was on hand at all times to assist with the complex customs clearing process in Johannesburg and ensure a smooth transition from King’s initial commercial flight on Kenya Airways to the chartered Beech 1900 for the next leg of his journey.

The turboprop aircraft was chosen for its suitable cargo size, which allowed two vets to travel alongside the lion with access at all times.

Air Partner director of freight, Mike Hill says: “We applaud the amazing work that Born Free does in the field of animal protection and were honoured to have played a role in this rescue mission to bring King to Shamwari, where he will be given expert care for rest of his life.

“We pride ourselves on our ability to handle every kind of cargo, however sensitive or valuable, and – as always – my thanks go to my team for their hard work and dedication.”

Born Free Foundation animal rescue and care manager, Maggie Balaskas thanked Air Partner for helping to save King, saying: “King is already settling into his new home at our Big Cat Rescue Centre at Shamwari Private Game Reserve, South Africa – he is exploring his new surroundings and is intrigued by all the new sights and smells around him.”

She also says King was one of the lucky ones, as nobody knows how many other wild animals are illegally being kept as pets across Europe, promising: “Born Free will continue to work hard to ensure that wild animals are kept where they belong – in the wild.”