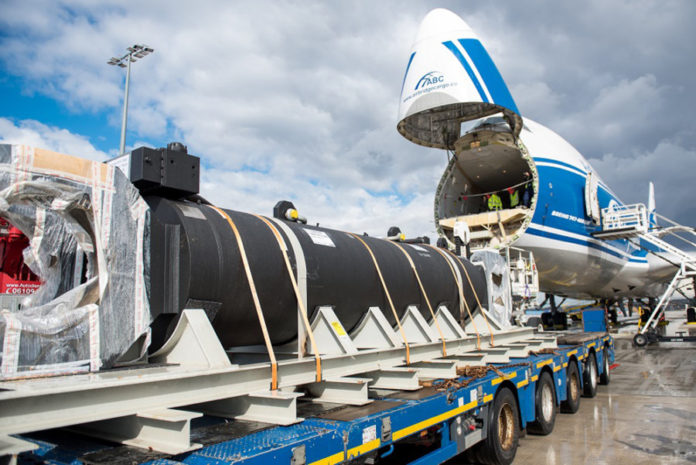 AirBridgeCargo Airlines has shown its expertise in transporting outsized cargo with a record breaking 40-tonne shipment, showcasing its abcXL product.

After arriving in Frankfurt, AirBridgeCargo transported the spare part to Singapore onboard one of its Boeing 747 Freighters.

The heavy part, which was needed for an ocean-going vessel, was safely delivered to its final destination thanks to the abcXL team.

Despite challenging weather conditions in Frankfurt including strong winds and rain, the loading procedures were completed as planned under the control of abcXL specialists and the operations team, ensuring the shipment, weighing 40 tonnes after build-up was securely loaded.

The abcXL teams completed all the arrangements and gained necessary confirmations within six days of receiving the initial customer request to the booking stage, including organising essential operational staff and equipment.

Sergey Lazarev, general director of AirBridgeCargo Airlines says: “This is the all-time record shipment weight for our company and, as we celebrate our 15th anniversary year, it is another demonstrate of our expertise and delivery capabilities. We are delighted that our customers value our network of dedicated abcXL staff and hubs.”