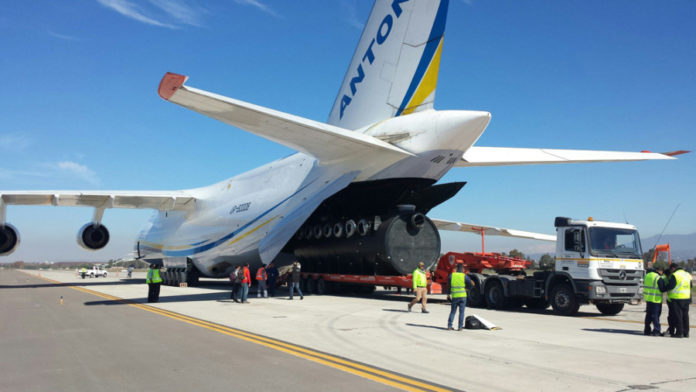 Antonov Airlines transported two mining filtration units from Chile to Argentina in a flight taking 39 minutes on board an Antonov AN-124-100.

The 24 tonne consignment included two large industrial piping filtration units measuring 12 metres long, four metres wide and 3.6 metres high, was transported for Hunt & Palmer Cargo Charters from Santiago to Mendoza, as roads in the region had been closed due to adverse weather conditions.

Hunt & Palmer Cargo Charters aircraft charter broker, Dan Litten says: “The flight was needed as the road conditions in the region were too hazardous due to adverse weather. The end user could not risk transporting the cargo by road.”

He adds: “We worked closely with ANTONOV Airlines to get the permits issued for the aircraft to fly at such short notice. The flight was confirmed late on Wednesday, and operated on Saturday.”

The AN-124-100 on-board crane system, which has a maximum lift capacity of 20 tonnes, allowed for safe loading and unloading of the cargo, and Antonov carries an adaptor on board each aircraft extending the lift capacity by 10 tonnes.

Antonov Airlines commercial executive, Martin Banns says: “No special adjustment or external equipment was required for what was one of the shortest flights we have operated in a decade.”

He adds: “We were able to lift the cargo straight off the trailers with the aircraft’s internal cranes. Combined with the short live sector flight, we tackled the urgency of the request efficiently and swiftly.”