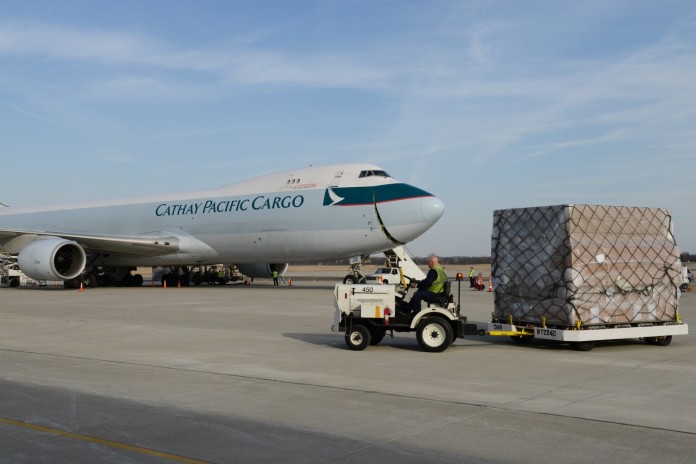 Flights added by Cathay Pacific Cargo and Emirates SkyCargo have boosted tonnage at Rickenbacker International Airport, but the gateway still feels freight forwarders and shippers are not aware of it as an option to move goods.

He says the airport is seeing “unprecedented growth”, especially in international volumes, up 250 per cent through the third quarter (Q3) compared to Q3 in 2014.

“While we are not privy to rates and yields, we can advise the planes are arriving at Rickenbacker at capacity and space continues to be in high demand,” Whitaker tells Air Cargo Week.

He hopes Trans-Atlantic or Trans-Pacific bellyhold routes will be added to the Rickenbacker schedule in the next few years, which will give a further boost to cargo volumes and operators.

Asia accounts for virtually all the imported cargo at the gateway from South East Asia and India. As for exports the airport is seeing greater geographic diversity while charters are alsp doing well, boosted by links developed with forwarders and airlines during the US West coast port strike.

The airport still faces challenges, notably making air cargo operators and customers aware of what it offers. Whitaker says there are benefits of Rickenbacker: “We don’t have the congestion difficulties of other airports and the region is continually investing in the infrastructure surrounding the airport that allows trucks to access highways very easily and efficiently.”

He adds the airport is working closely with gateway minded forwarders to include Rickenbacker as a gateway option.

Rickenbacker will open a new 100,000 square foot cargo terminal in the middle of next year to meet rising demand. Whitaker says: “Our existing warehouses are full and more capacity is essential if we are to grow. We simply would not be able to grow without additional on-airport warehouse capacity.”