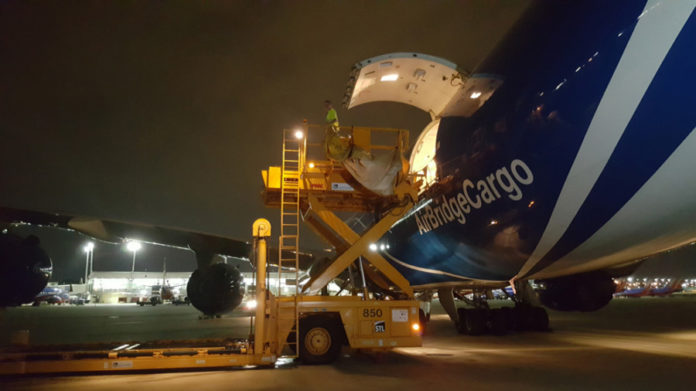 St. Louis Lambert International Airport (STL) has experienced a boom in cargo charter activity in 2017 with year-to-date growth of 30 per cent.

The average weight of cargo on flights has increased almost four-fold to 20.8 tonnes and STL saw its two heaviest charter movements for some years, with 98.2 tonnes and 105.6 tonnes uplifted by Boeing 747-8 Freighter aircraft operated by AirBridgeCargo Airlines.

These were the first ever operations to STL by the 747-8F and it was visited by the Antonov AN-124 for the first time in five years.

The region’s automotive and aerospace industries have been the mainstay of the charter flights.

STL cargo development director, David Lancaster says: “The recent growth in total charter tonnage, the regular appearance of larger aircraft and the heavier loads being carried all point to a growing recognition of the benefits of using St. Louis Lambert for cargo charters.”

He says its cargo handling facilities and space helps STL, and all cargo charters are handled by Worldwide Flight Services.

Lancaster says: “Local manager Steve Rogers and his team do an outstanding job and are great partners in developing this business. We pride ourselves on being an easy airport to work with, having no slot restraints or congestion and a great location in the geographic centre of the United States.”

He concludes: “With this upsurge in charter activity, the recent opening of our livestock handling centre, the imminent launch of new international services by WOW and the steady growth of non- stop domestic markets, the prospects for cargo through STL look better than at any time since the closure of TWA’s hub operations in 2002.”