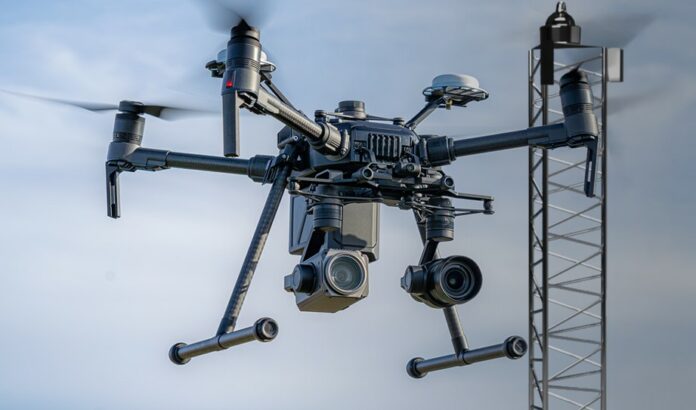 The future of transportation technology lies in drones. At least, that’s what aviation technology company Altitude Angel believes, as they look towards the development and construction of the 165-mile long superhighway for unmanned aerial vehicles (UAVs), called ‘Project Skyway’.

The government-backed project is seeking to transform the way that cargo and, eventually one day, people are moved around the country, and potentially abroad. “Skyway can revolutionise the way we transport goods and travel in a way not experienced since the advent of the railways did in the 18th century,” Altitude Angel’s CEO and founder Richard Parker believes.

Although some people might think that the rollout of drone networks will mean the complete replacement of traditional forms of delivery services, that’s not the aim of Altitude Angel here. Instead, they see the drone network fitting neatly into the existing options available to companies, providing them with a new way to meet the growing demand for cargo transportation.

One key area the company has noticed over the last few years that can benefit particularly from UAVs is the medical industry, with Covid having shown how drones can provide support to remote areas, Phil Binks, Head of Air Traffic Management at Altitude Angel explained.

Pathology samples, blood for transfusions, time critical deliveries and medical supplies can all be transported in a more reliable manner via drones. If medicine can only survive 30 minutes or one hour outside of a laboratory, Binks argued it makes sense to use a drone that “can get to your hospital within 20 minutes,” instead of taking “that risk on a road and getting stuck in traffic.”

“It’s another method of transport to enhance the delivery services and transportation services. We are not suddenly going to see all trucks leave the road, everything’s going by air. That just isn’t going to happen,” Binks explained. “How they’re used will be part of an existing mosaic of transport.”

While drone technology has been previously limited in its rollout by the need to constantly see the UAV, Project Skyway and Altitude Angel is “enabling this beyond visual line of sight (VLOS) operations and at a cost effective level as well,” Binks highlighted.

This project, putting down a 165-mile network, is costing approximately £12 million, making it “orders of magnitude cheaper than anything that’s being explored today.” The drone superhighway has achieved this cost by integrating with existing technology, partnering with BT to use its tower technology.

That compared with the cheaper running costs for the drone corridor, compared with current air traffic management, looks to provide companies with a more affordable method of transporting cargo, while not compromising their other needs. In fact, they believe it adds additional benefits for delivery companies, particularly in the form of cutting their carbon footprint.

Transportation currently accounts for 34% of the UK’s net domestic CO2 emissions and heavy goods vehicles make up 17% of domestic transport emissions. As companies target sustainable practices in a way that doesn’t compromise delivery times, drones offer a potentially speedy alternative that takes cargo off heavy goods vehicles and into a non-fossil fuel mode of transport.

The importance of messaging
“People have always feared technology and change,” Binks recognises, pointing to plans to ensure public consultations form a big part of ‘Project Skyway’. While sensational headlines might make drones whizzing around seem a scary concept, the company sees huge potential for the technology to tackle the existing challenges companies face, such as traversing difficult terrain.

Through effective PR campaigns, Altitude Angel hopes to show that “drones are good,” with the earlier mentioned impact on the NHS being a key message to secure people’s support. “We’re saving lives because we’re getting children’s meningitis tests from a hospital to a lab in under half an hour, when it would take two hours by road,” Binks said, “that will undoubtedly play a massive part in this.”

When it comes to potential limitations or safety concerns regarding how large a drone’s payload can be, that all comes down to the type of UAV and its design, “it’s really ‘how long is a piece of string?’” There are drones that can travel long distances, carrying hundreds of kilos of weight, with one company they’re working with looking to design an airframe capable of holding 300 kilos.

Theoretically, there is no limit to the type of cargo that could be moved by drone but Altitude Angel is realistic that there is a public perception to consider. Binks acknowledges, for example, that seeing a drone 400 feet above you, with a 30 tonne payload is “going to be quite scary for anybody on the ground.” That’s why there’s still work to do, establishing the balance between the convenience of drones and what people are comfortable with being transported above them.

It’s all part of the process that links to the company’s mission of maintaining an active conversation with people, as the industry explores the type of payloads it makes sense to move via drones. Altitude Angel sees itself as the “enabler for those conversations,” recognising the industry will have to adapt to maximise its potential without compromising the public’s wishes.

Aviation is evolving at home and abroad
While the project has received the green light from the government, Altitude Angel expects it to take around two years for it to be fully up and running.

“This is new technology. We’re asking questions of the Civil Aviation Authority that have never been asked and they are responsible for keeping the UK’s air space safe,” Binks recognised. Despite there still being hurdles to clear, Altitude Angel is optimistic that its technology will be certified within the next 24 months.

While each country’s interest differs, if the CAA certifies the technology, Altitude Angel is ready to set its sights beyond the horizons of the UK. At the Farnborough Air Show, the company revealed it had spoken to a number of US states, Middle Eastern countries and other nations who want to replicate the project. “Third world countries could easily adopt this technology, as they have mobile phone masks all over the place, Binks explained, suggesting it could “quickly support remote areas of Africa.”