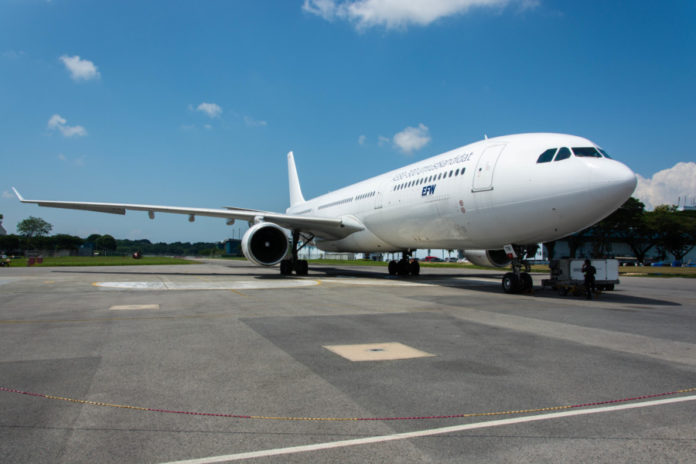 The conversion market is buoyant and Elbe Flugzeugwerke’s (EFW) Airbus A330-300 passenger-to-freighter (P2F) conversion programme is hitting the right notes.

The A330P2F programme was launched in 2012 as collaboration between ST Aerospace, Airbus and EFW. It includes the A330-200P2F, which Egyptair Cargo was the first to sign up for in December 2014, and the A330-300P2F, with DHL Express the first customer.

The first conversion is taking place at EFW’s Dresden facility and is set to be delivered by the end of this year.

EFW director of sales for aircraft conversion, Thomas Centner (pictured below) says both customers have been operating its converted A300-600’s for many years and it is proud both extended the number of orders before even the prototype phase is finished.

“For us this is a strong sign of trust, appetite for more and a good indication that the A330P2F is regarded being the right aircraft for the future. 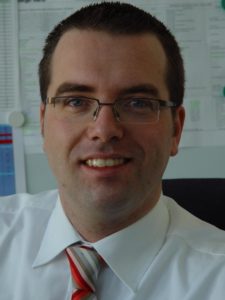 “With redelivery of the first prototype A330-300P2F to DHL in about half a year and to Egyptair in the next year we strongly believe that a number of operators will jump onboard, especially when the first larger batches of conversion candidate aircraft become available,” he explains.

He adds: “The market is big and waiting for the next step. The A330P2F can deliver and is well fitting into the trend – growing demand for express transportations at falling densities.”

Both programmes EFW believes brings benefits to operators and the A330-200P2F it says is the most modern and efficient of its kind, and a really good baseline for freighter conversions.

And the volumetric use on the A330-300P2F it believes is “phenomenal” given its great fuselage diameter and length of the aircraft, enabling the installation of the “most flexible” main deck cargo loading system on the market and at the same time the existing lower deck cargo compartment remains fully usable.

There is sufficient A330 feedstock it seems and to date, EFW says there is more than 1300 A330’s in service and total orders have reached almost 1700 units, which provides a huge potential for future conversions.

Centner says: “Not all of those aircraft will be converted, but the A330 family will provide the necessary market liquidity for used aircraft in a perfect ecosystem of aircraft owners and financiers, airlines and operators, services providers, MRO facilities and spares and tooling supply, pilots, mechanics and other trained staff. This is the right platform to build a successful freighter conversion programme.” 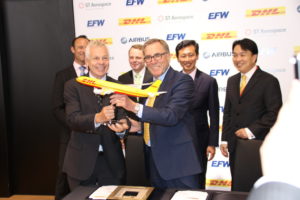 EFW sees demand worldwide for its A330P2F programme with the A330-300P2F mainly in the express segment and the A330-200 in general cargo, but also express.

He says: “We regard the US and the European market as mature markets with a strong replacement but still solid growth potentials. The markets in Asia, mainly China, will have a strong need to develop into regional medium widebody operations as well, which is due the further boom in e-commerce and inauguration of hub and spoke systems.”

Centner explains there is further upside potential related to the new A320/A321P2F programme as like the A330P2F the A320/A321 basic aircraft is capable of accommodating containers in the lower deck of the aircraft. If the incoming aircraft is not equipped with such a system it can be retrofitted at EFW during the conversion phase.

He says: “The A320/A321P2F conversion programme is the first in this size category offering such an easy to handle and operate volumetric usability, which is offering both main deck and lower deck containerised loading.

“The customer can therefore load up to 14 position in the main deck plus up to 10 container positions extra in the lower deck – a unique feature.

“The new family of freighters A330F/P2F and A320/A321P2F will provide modern, easy to operate fly-by-wire technology and advanced performance. Like in the passenger market the cross crew commonality will play a key role to minimise operational cost and improve flexibility.”

The P2F conversion market is competitive with various programmes being run and Boeing aircraft are especially prominent.

Centner says it is competitive, especially in the narrowbody segment as we enter ‘Boeing dominated terrain’. “But we have a lot unique selling points to offer, which makes us convinced that both the A330P2F and the A320/A321P2F will be very successful,” he adds.

“Belly space has gained market share from traditional freighters given the enhanced capabilities of new generation passenger aircraft like 777, 787, A330 and A350,” Centner says.

He adds: “But this trend is more related to general cargo and long-range missions. Express and e-commerce however are mainly overnight and off main passenger routes.

“The smartphone has changed the way of consumer behaviour worldwide and B2C online trading is increasingly connected to overnight deliveries.

“This requires dedicated freighter aircraft. And this market is growing worldwide, therefore we see a strong future for freighters.”