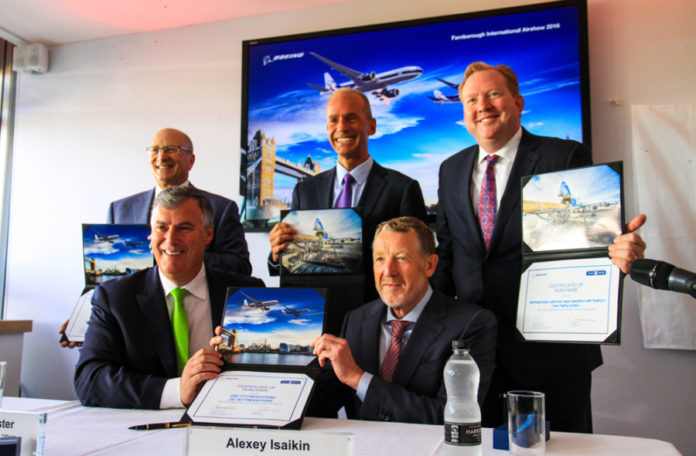 The group is one of the largest 747 freighter operators, and it wanted to add more 747-8s to its fleet due to its unique cargo loading and carrying capabilities for unique, oversized and heavy cargo.

The deal was signed at the 2018 Farnborough International Airshow, and after the signing ceremony, Volga-Dnepr Group president and chairman of CargoLogicHolding chairman, Alexey Isaykin said: “This is a very significant day in our company’s history. With this package of agreements, we will grow our business with the unique and unmatched 747-8 Freighter and open new market opportunities with the 777 Freighter, the world’s longest range twin-engine cargo jet.”

He adds: “We are true believers in the 747-8 Freighter, it is a very special airplane. We fly it every day and we understand why operators around the world want more of them.”

The group and its partners have largely built their business on large four-engine freighters, it now plans to expand its future fleet with twin-engine 777 Freighters. Isaykin says: “CargoLogicAir, part of CargoLogicHolding, started its business by flying 747 scheduled and charter flights to and from the UK. We are excited to extend the network using a range of Boeing family aircraft including Boeing 747-8F, 777F, 767F and 737-800BCF.”

The package of agreements also includes a commitment for both companies to explore other freighter solutions such as new production 767s or converted jets such as 737-800 Boeing Converted Freighters.

Boeing has had more than 100 orders and commitments for production and converted freighters this year, with Boeing Commercial Airplanes president and chief executive officer, Kevin McAllister saying: “We are extremely honoured that Volga-Dnepr Group and CargoLogicHolding have once again placed their trust on Boeing’s freighter family to carry their business into the future. We look forward to expanding our relationship with our great partners and delivering new freighters to them for many years to come.”

Boeing Global Services will also provide AirBridgeCargo with a Crew Pairing solution to support the planning and operation of the airline’s 300 crew members to optimise work duties, improve efficiency and airline productivity.