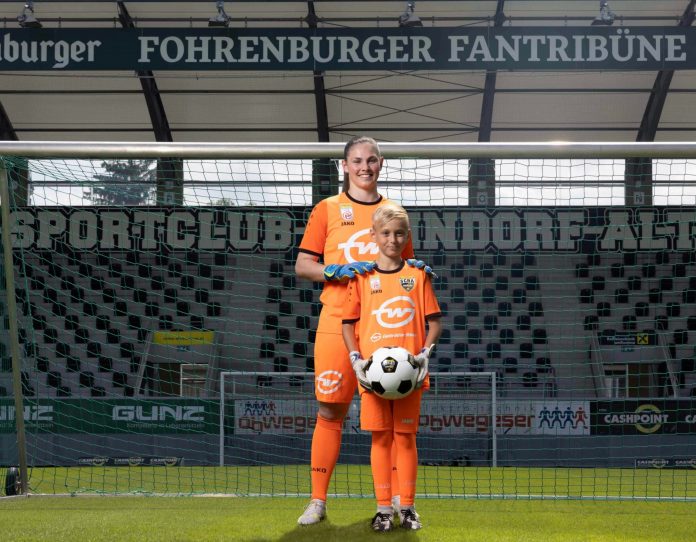 Gebrüder Weiss had expanded its partnership with the soccer club CASHPOINT SCR Altach and now outfits all of the club’s goalkeepers. Everyone from the youth to the professional teams will wear the Gebrüder Weiss orange jersey in the future.

The partnership between Gebrüder Weiss and SCR Altach launched in 2019 when the goalkeepers of the men’s professional team started wearing the Gebrüder Weiss logo on their chests for the first time. Now, the cooperation will be extended for at least three more years with additional dimensions. Not only the goalkeepers of the men’s Bundesliga team, but also the female goalies of SPG SCR Altach / FFC Vorderland will be wearing orange, along with all of the young players from U7 to the Juniors. This means that Gebrüder Weiss now provides a total of 25 teams with orange jerseys for players wearing the number 1, translating into more than 500 championship games every year and establishing the Gebrüder Weiss jerseys as the trademark of SCRA goalkeepers.

Werner Gunz, vice president of SCR Altach: “The fact that the excellent cooperation with Gebrüder Weiss has been extended is the perfect recognition of the broad appeal that SCR Altach now has. Our two Bundesliga teams enable us to represent Gebrüder Weiss throughout Austria, and we are also firmly rooted in Vorarlberg due to having the largest popular sports department in the country.”

Wolfram Senger-Weiss, CEO of Gebrüder Weiss: “The co-operation over the last two years has been excellent. Altach is a club that has clear goals and is managed sustainably. We can identify well with that. We are looking forward to supporting all teams this time and wish them a successful season.”

Frank Haas, head of corporate brand strategy and communications at Gebrüder Weiss: “The branding of jerseys at SCR Altach guarantees high visibility for our company throughout Austria. We are proud to sponsor the Number One of Vorarlberg soccer and look forward to celebrating joint successes.”