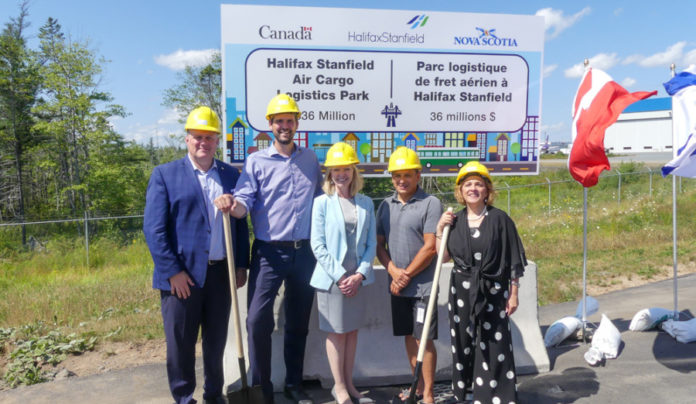 Ground has been broken at Halifax Stanfield International Airport’s Air Cargo Logistics Park in a ceremony attended by airport executives and local dignitaries.

The logistics park will be built on 25 acres of vacant land at Halifax Stanfield and include a new cargo apron area, buildings for cargo handling, an aircraft de-icing facility and associated operational areas both airside and groundside when it opens in early 2021.

Carter says: “HIAA is thrilled to officially break ground on our new Air Cargo Logistics Park, which will further increase cargo capacity at the airport. This facility will create jobs, enhance trade and expand international capacity to foster exports not only for Nova Scotia, but also for the entire region.”

The logistics park has been funded by a C$18 million investment from the federal government, C$5 million from the provincial government and a C$13 million contribution from HIAA.

Cargo exports out of Halifax Stanfield have seen five consecutive years of growth, and are worth C$514 million to the provincial economy. In 2018, New Brunswick and Prince Edward Island’s economy benefitted from Halifax Stanfield’s cargo services with $65.7 million of goods exported through Halifax.

Premier McNeil says: “The new cargo processing and logistics facility – the largest in Atlantic Canada – will be an important addition to our transportation network. I’m pleased to see more opportunities for businesses in Nova Scotia and the region to get their high-quality products to market. Growing our exports will help create jobs at home and strengthen our economy.”