After a very positive year in 2017, could American Airlines Cargo improve further? Of course, by having a record-breaking year in 2018.

The airline had its best flown-as-booked performance in history whilst moving higher volumes than ever before.

Samways says: “We also generated more than $1 billion in revenue for the first time – a testament to the efforts of the whole team.”

He has high expectations for 2019, with service enhancements such as the iCargo platform, and new routes, not only within the Americas but internationally, on the way.

People are also very important, with Samways saying: “Regarding our team, we’ve also added a number of key, new faces to our leadership team, who will help us continue to focus on delivering an industry-leading customer experience from booking to pick up — and that’s key in such a fiercely competitive industry.”

American Airlines Cargo has an extensive network, with approximately 6,700 flights a day. The network includes an increasing number of widebody flights connecting domestic hubs, offering the ability to connect much of the world with as little as one stop.

The aircraft fleet is very important, with Samways saying: “The most effective facilitators of trade are of course the 150 widebody aircraft in our fleet, including 20 Boeing 787-8s, 19 787-9s and the 47 787s we have on order, alongside our 777 equipment.”

Narrowbody flights that primarily operate within the US and the Americas compliment widebody services, and are suited to the ever-growing e-commerce business.

American Airlines already serves more destinations in Mexico and Latin America from the US than other carriers, and the network will be expanded further in 2019.

The airline is a big player in the Brazilian market, with Samways explaining: “Through our collaborative work with shippers and forwarders, we’re hoping to take on an even greater amount of automotive related shipments as well as speciality fruit heading to Europe and fish heading to the US.”

The Pacific routes are well positioned for shipping goods between Asia and Latin America with a stop in the US.

Samways sees nothing but a strong future for American Airlines Cargo, due to its extensive network and ability to feed cargo to destinations across the Americas.

He says: “We are expanding service to and many of these locations, such as DFW, where we will operate 900 flights per day in summer 2019, giving us the ability to further develop our products and services.”

Maintaining its market position will be an ongoing challenge, but Samways has confidence in the team, saying: “We’ve set the bar very high and, thanks to our great cargo teams around the world, we have developed a reputation for delivery in all locations, both domestically and internationally.” 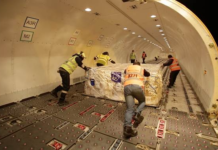