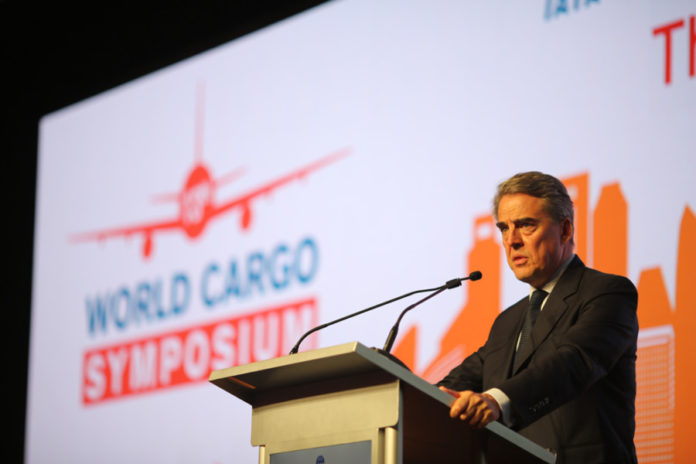 The International Air Transport Association (IATA) has called on governments and the air cargo industry to focus on modernisation, global standards and open borders.

Director general and CEO Alexandre de Juniac made the call during the opening address at the 13th World Cargo Symposium in Singapore.

The operating environment for air cargo is increasingly challenging, with growth slowing to 3.5% in 2018, significantly below the extraordinary growth of 9.7% in 2017.

Weakening global trade, sagging consumer confidence and geopolitical headwinds contributed to a general slowdown in demand growth commencing in mid-2018, with January 2019 seeing a contraction of 1.8%.

IATA is calling for modernisation of industry processes to efficiently meet the demand of doubling demand expected over the next two decades.

The four focus areas are global implementation of the e-AWB, universal adoption of a common data language – Cargo XML standards, smart data sharing and use of performance data.

He says: “The problem is not technology. The problem is the speed to market. It’s exceptionally tough to drive change in a global industry with a huge number of stakeholders where safety is top priority. But it is not mission impossible. I challenge stakeholders to find ways to drive critical change at the speed our customers expect.”

To improve global standards, de Juniac highlighted safe transport of lithium batteries, saying they are being ignored by rogue shippers and governments are failing to enforce the rules.

He says: “In some cases, we see more effort going into stopping counterfeit production of Louis Vuitton bags than lithium batteries. Both need attention. But lithium batteries are a safety risk. And we need governments to do better at enforcement.”

Global agreements to make trade simpler, cheaper and faster are required, with IATA calling on governments to implement the World Trade Organization’s Trade Facilitation Agreement, the Montreal Convention 1999 and revisions to the Kyoto Convention of the World Customs Organization.

IATA is calling on governments to keep borders open to trade, saying that protectionism, trade friction, Brexit and anti-globalisation rhetoric are a real risk to business and global economies.

He says: “We need to be a strong voice reminding governments that the work of aviation—including air cargo—is critically important. Trade generates prosperity. And there are no long-term winners from trade wars or protectionist measures.”