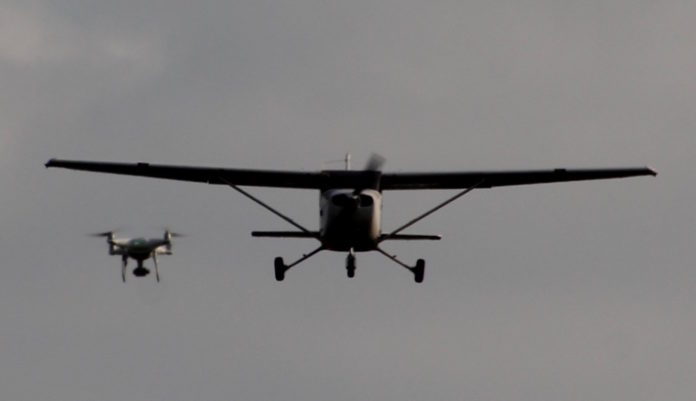 During an airborne human factors experiment, certificated pilots failed to see a common type of quadcopter during 28 of 40 close encounters, researchers with Oklahoma State University and Embry-Riddle Aeronautical University reported.

In other words, the pilots got a bead on the invading drone in 12 out of 40 cases, or only about 30% of the time. When the drone was not moving, the task became even more difficult. A mere three out of 22 motionless drones were spotted by the pilots. Drones were detected at distances of between 213 and 2,324 feet.

“Dangerous close encounters between aircraft and drones are becoming an increasingly common problem,” Wallace said. “Statistics on pilot sightings of drones continue to increase year over year, and what is being reported by pilots is probably just the tip of the iceberg. The vast majority of the time, unmanned aircraft are not being seen by pilots.”

Even in a best-case scenario, if a drone was spotted at the study’s maximum detection range of 2,324 feet, the pilot would have only about 21 seconds to avoid a collision. “That might be enough time if the drone was hovering in one spot, but not nearly enough if it’s in flight, headed for the aircraft,” said Dr Matt Vance, assistant professor of aviation and space at Oklahoma State. “The situation is far more dangerous when both aircraft are moving,” he said.

“Our eyes are attuned to movement. When a drone is not moving, it becomes part of the background.”

An aircraft’s final approach for landing is an especially risky time for a drone encounter because “it can catch you unaware and you have little time to react,” explained Dr Jon M Loffi, associate professor of aviation and space at Oklahoma State. “You don’t have the altitude to maneuver safely, and if an engine ingests a drone, that could bring the aircraft down.”

Currently in the United States, there are more than 1.4 million registered, and likely many more unregistered drones, and they continue to proliferate, Wallace said. Close calls between drones and commercial aircraft are on the rise. On Oct. 21, 2019, for example, a commercial crew on approach to Boston’s Logan International Airport reported a drone at about 3,500 feet above ground level – higher than US Federal Aviation Administration (FAA) regulations allow. The event took place a week after another crew spotted a drone after takeoff from the same airport.

While the FAA “has made strides to secure control airspace from UAS incursions,” the study authors wrote, “their efforts have been met with mixed results.” There is currently no reliable method for tracking UAS flights within the United States.

The research team’s next project will involve rigging a drone with an electronic pinging device (UAvionics Ping), which uses ADS-B (automatic dependent surveillance-broadcast) technology to track aircraft. The study will assess whether the technology helps pilots pinpoint and avoid a collision with the drone.

Leveraging UAS remote identification data has been proposed as a way to reduce the risk of aircraft-drone accidents. As of January 2020, Vance noted, no aircraft will be allowed to fly in controlled airspace near airports without ADS-B tracking technology, but the law does not extend to small unmanned aircraft. If all drones had such technology, pilots would have a more complete picture of the skies around them, thereby improving safety, Vance said.