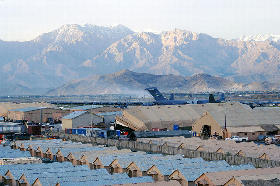 The US government’s Federal Aviation Administration (FAA) has been unable to stop a $45 million claim against it in the US Court of Federal Claims by American Insurance Group (AIG) company, Commerce & Industry Insurance, and National Air Cargo.

A US Court of Federal Claims judge has ruled that the case can be heard. The FAA confirmed the ruling, but directs enquiries to the US government’s Department of Justice (DOJ). The DOJ declined to comment. AIG and National are sueing the FAA for refusing to pay out $42 million under a non premium and liability war risk policy. AIG paid National after its Boeing 747-400 crashed at Bagram airbase, Afghanistan on 29 April 2013. All the crew were killed. National’s 747 N949CA, flight NCR102, was to fly military vehicles out of Afghanistan. The plaintiffs claim that the crash constitutes a “war risk occurrence”, and is covered by insurance. The sum insured was $40 million. The claim for $45 million includes crash site remediation and wreckage recovery.

After the accident, National was paid $42,153,003 by the AIG firm. At the time National had a multimodal contract with the US Department of Defense (DOD) and was acting as part of the Civil Air Fleet Reserve, providing services for the United States Transportation Command.

Under the DOD contract National was required to get insured through the FAA, and the Commerce & Industry policy was issued on 28 September 2011. The plaintiffs allege that the FAA is in breach of its contract by failing and refusing to reimburse them. AIG declined to comment on the judge’s ruling, despite it being in its favour. National was also unavailable for comment.

The Afghanistan Ministry of Transportation and Commercial Aviation was unavailable for comment on the progress of the crash investigation. The US government’s National Transportation Safety Board (NTSB) directs enquiries to the Afghan ministry.

According to the NTSB, flight NCR102 was destined for Al Maktoum International Airport and that the 747, “crashed just after takeoff from the US-operated air base at 11.20am local time. All seven crew members onboard were killed and the plane destroyed.”