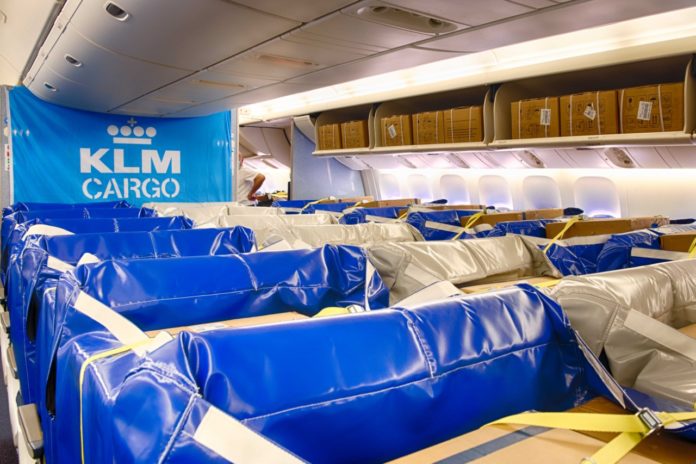 2020 was an unprecedented year for our industry and adaptation has been the name of the game ever since the Covid-19 pandemic began. KLM has responded to the new reality by operating Cargo in Cabin (CIC) flights
carrying medical relief goods and PPE material on seats secured with plastic sheeting and straps. Initially, these flights (more than 150 so far) were operated on the airline’s remaining three KLM Boeing 747 Combis.

Now that these aircraft have been retired from royal blue fleet, however, the Boeing 777s have taken over. Since they are also fully operational for passenger flights, flight safety is a major concern. Boxes must be loaded into the seats with enormous care to avoid damaging the interior, seats and entertainment systems.

KLM Cargo has partnered with its long-time Cargo equipment supplier Trip & Co to design a user-friendly, easy to-install (and remove) quality product. Basing its design on KLM’s considerable Cargo in Cabin experience, Trip & Co has produced the tailor-made Cargo Seat Bag (CSB). Working with KLM’s Cargo in Cabin project team, Trip & Co has fine-tuned the CSB and adapted it to KLM’s specific needs. The product has been submitted to the Dutch Civil Aviation Authority (IL&T) for approval and authorisation under Art. 71(1) of Regulation (EU) 2018/1139 (EASA).

The bags not only protect the interior, but also double loading capacity on the seats, reduce physical strain during handling and prevent plastic waste. KLM received the first set of 172 Cargo Seat Bags (single-seat, double-seat and triple-seat versions) on April 8 and undertook its first operational flight using CSBs on April 13, carrying about 950 boxes (10 tonnes) of medical relief goods and Covid-19 test kits from Shanghai to Amsterdam.

Thanks to close collaboration between many different KLM departments and between KLM and Trip & Co, this innovative concept became reality, passed the official tests and received authorisation in record time. This “just-in-time” operation meets the need for extra cargo capacity for medical equipment (including PPE and vaccine equipment).

Ton Veltman, KLM Cargo in cabin project manager: “It remains extremely inspiring for me to be part of the closeknit team working on Cargo in Cabin. We have been active for over a year now, with involvement throughout
KLM and including our partner Trip & Co. By doubling CIC capacity on our 777s, we now have capacity similar to what we had on our 747s. I’m proud of the many KLM colleagues who have made this innovation happen and of the smart and exceptional product that we developed and delivered with them and Trip & Co. This is an example of creativity and perseverance that will be key in the years to come.”

Edwin de Jongh, chief commercial officer of Trip & Co: “We are very proud that our joint effort has resulted in a flexible, easy-to-use, lightweight solution that gives the airline an opportunity to offer extra cargo capacity in the passenger cabin and avoid having to convert the cabin permanently. It reminds me of the ‘quick change solution of the seventies’: within an hour, the cabin is transformed from ‘cargo’ to a place ready to welcome passengers
for a comfortable flight.”