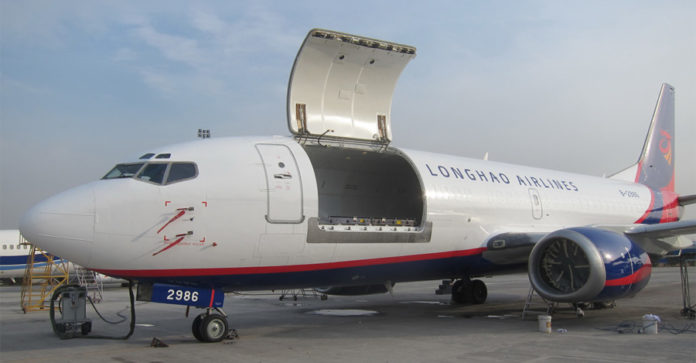 Chinese airline Longhao Airlines plans to open two international cargo routes in Nanchang to help the airport achieve its goal of handling one million tonnes of cargo and mail by 2025.

The routes from Nanchang should be operational by June and the airline says the development of the cargo and airline industry will help optimise the regional economic structure and improve the logistics environment, and is in line with the development of Changbei Airport in Nanchang, Jiangxi province.

Nanchang City and Longhao Group will cooperate to help Changbei achieve its goal of cargo and mail throughput of 150,000 tonnes by 2020 and one million tonnes by 2025.

Nanchang City deputy mayor, Yang Wenbin visited Longhao Group for discussions with local officials and management from Longhao Group about development, where the importance of the cargo and aviation industry was stressed.

The air cargo industry was described as a “bottleneck” but Nanchang Municipal Government supports Longhao Airlines opening international routes and the two sides will to what they call “1+N” cooperation in various fields around cargo and airlines.

Longhao Airlines was approved by the Civil Aviation Administration in 2016 to complete the construction and achieved operational qualification and its maiden voyage in nine months.

Nine cargo routes have been opened and three Boeing 737 freighters will be introduced to the fleet in the first half of this year, with another five to six routes being launched this year.

In December 2016, Jiangxi Provincial Airport Group signed an agreement with Longhao Aviation Group supporting Longhao setting up a passenger and cargo operation based at Changbei International Airport in Nanchang.

Longhao Group has also signed strategic cooperation agreements with Ruichang and Ruijin, and been in contact with more than 20 local governments in the province to discuss airport construction and cooperation.