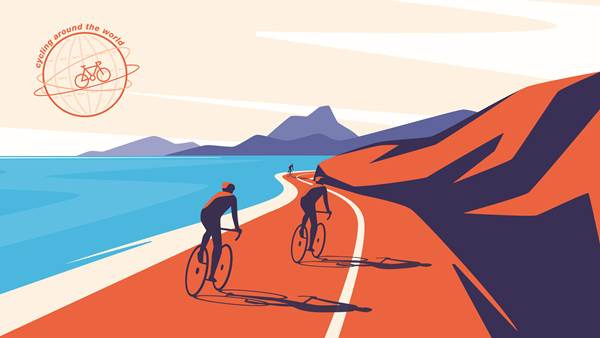 On April 1, the logistics company Gebrüder Weiss launched a campaign entitled “Cycling around the World,” open to cyclists around the world. Cyclists use an app to record and count the kilometres covered through to the end of September. The original aim was to cycle a total distance of 40,075 kilometres throughout the campaign – the same as the length of the equator.

The campaign goal was reached just 45 days after it began. The Earth was circled for a second time in mid-June, so Gebrüder Weiss set a new goal: to circle the Earth for a third time covering a total of 120,225 kilometres. A re-forestation project in Togo, West Africa, is also benefiting from the sporting ambition of the cyclists: for every 40 kilometers cycled, Gebrüder Weiss, in cooperation with the campaign partner natureOffice, finances the planting of a tree. Two thousand trees will be planted now, and after covering enough kilometers to go around the world three times, the corporate forest will grow by 3,000 trees.

“We are delighted by the great response to the bike campaign. We certainly believed that the participants would manage to circle the globe together. Still, we never thought they would manage it so quickly,” says Frank Haas, head of corporate brand strategy and communications at Gebrüder Weiss.

“As a logistics company, we are very supportive of people who set themselves sporting targets and get things moving of their own volition. The campaign also dovetails well with our sustainability strategy of promoting environmentally-friendly mobility. Gebrüder Weiss has also been very close to cycling for many years, being a logistics partner in numerous cycling events,” says Haas, explaining the idea behind the campaign.

Cyclists from inside and outside the company are invited to participate in “Cycling around the World” through the end of September. Participants can choose from six challenges of different lengths, covering distances between 60 and 6,000 kilometres. Gebrüder Weiss is offering prizes for each challenges.