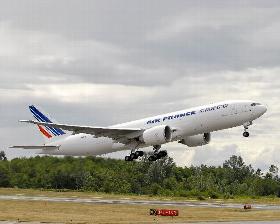 Air France-KLM has seen its nine month profit fall 79.2 per cent to 40 million euros ($50.9 million), compared to January to September 2013, after a two week September pilot strike cost it 330 million euros, it says.

The strike occurred because of a dispute between Air France-KLM and the pilot union, Syndicat National des Pilotes de Ligne. The union feared the Air France budget airline Transavia Europe would see jobs being exported. The Transavia Europe project was abandoned as part of the agreement to end the strike, which lasted from 15 to 28 September, costing 20 million euros a day, the airline says.

Air France-KLM says: “In addition to the 330 million euro direct impact of the Air France pilot strike on the third quarter operating result, the Group noted the build-up of a delay in fourth quarter booking trends.” It says it does not know how much bookings were directly affected by the strike action or by consumer demand. Air France-KLM continues: “The Group estimates that part of this delay could be progressively reduced over the coming weeks, without being able to quantify this adjustment exactly given the exceptional nature of the event.”

In the first three quarters, revenue tonne kilometres fell by 2.2 per cent to 7.3 billion, while capacity was 11.6 billion available freight tonne kilometres, down 2.9 per cent – this meant the load factor increased by 0.5 percentage points to 62.6 per cent.

Air France-KLM says it remains committed to its Perform 2020 strategic plan of breaking even by 2017 and being profitable by 2020. As part of the plan it will cut its full freighter fleet from 14 to five by the end of 2016.