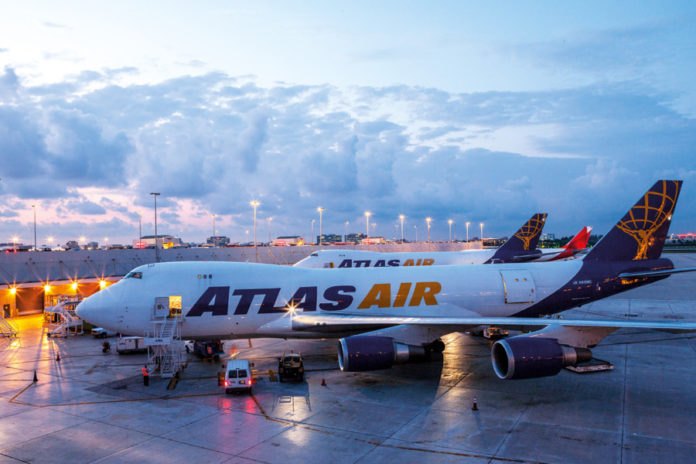 The Teamsters Union, which represents Atlas Air and Southern Air pilots who fly for DHL and Amazon Air, is warning investors not to believe the positive spin put out by the parent company in its latest financial results. In an open letter to investors, it says that many pilots are leaving the employment of Atlas Air Worldwide Holdings (AAWW)’s subsidiaries. Atlas Air and Southern Air and ATSG’s ABX Air, disillusioned with pay and conditions.

The letter says that a recent survey of more than 1,200 pilots showed that over 60% were preparing to leave and seek work at competitors like UPS and FedEx; more than 65% of pilots who responded from Atlas Air and ABX Air had little faith that the carriers have enough pilots to meet the long-term needs of the Amazon Air programme. Cancellations and flight delays for Amazon Air were reported by almost 50% of pilots who responded.

The union claimed that pay rates were lagging 40-60% behind UPS and FedEx rates and that pilots had often been asked to fly on rest days.

It adds: “As the quarterly earnings for AAWW and Air Transport Services Group (ATSG) approach, we — the pilots who fly for AAWW’s Atlas Air and Southern Air and ATSG’s ABX Air — are warning shareholders, analysts, and more of numerous issues at the carriers that executives will not be reporting.

“Both AAWW and ATSG are continuing partnerships with DHL and Amazon, with potential to expand the work. But don’t be fooled. As pilots at the carriers know all too well, such partnerships are not sustainable if the current attrition, retirement and working conditions persist at AAWW and ATSG.”

President and CEO William Flynn, said: “Our focus is on express and e-commerce, and fast-growing markets in Asia and elsewhere, such as South America, where we had the strongest year in the company’s history. As airfreight tonnage continues to grow, further globalization will require time-definite air networks to facilitate the flow of goods.”

He added: “We expect to benefit from a full-year of flying by the aircraft we added in 2018 for customers such as Asiana, DHL Express, Inditex and SF Express. We will see our first year of flying twenty 767-300s for Amazon.”

The carrier was also operating three 747-400 freighters for Nippon Cargo Airlines, which would increase the fleet to 115 aircraft and it is also anticipating more flying for the military than in 2018.

Flynn declared: “As a result of the momentum that we see, we anticipate that our adjusted net income in 2019 will grow by a mid- to upper-single-digit percentage this year.”

ACW has approached AAWW for a response, which is currently awaited.