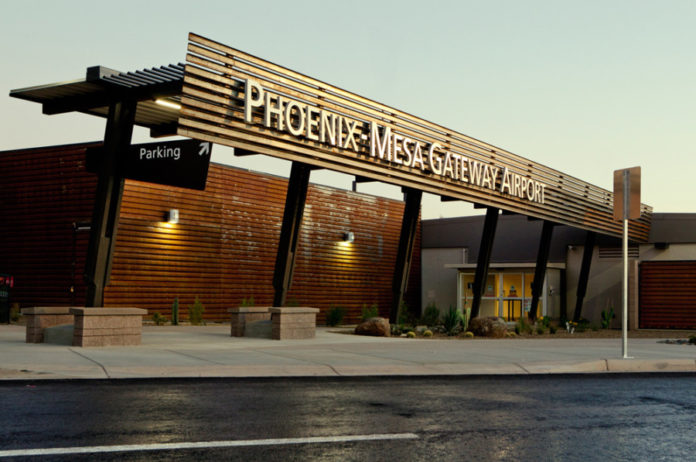 Phoenix-Mesa Gateway Airport will be the home of SkyBridge Arizona, the first international air cargo hub to be home to both Mexican and US customs, giving cross-border trade a major boost.

The plan was announced by Arizona governor, Doug Ducey, and it will enable e-commerce companies, manufacturers and other commercial interests conducting business in Mexico and throughout Latin America to transport goods more efficiently and cost-effectively between countries while ensuring proper inspections and safety controls.

The project is expected to create 17,000 direct and indirect jobs while increasing cargo flights out of Phoenix-Mesa by 2,000 a year, eventually reaching 10,000 by 2036.

Governor Ducey says: “Arizona has forged an incredible relationship with our friends and neighbours in Mexico, and we’re very proud of this latest collaboration to enhance international trade and create more jobs for Arizonans.”

SkyBridge chief executive officer, Ariel Picker says: “SkyBridge will truly change the way we conduct cross-border business, slashing delivery times for companies and ensuring safe transit. This is true international cooperation and something we can all be proud of.”

The new service will allow users to send products anywhere in Mexico without having to go through the international customs centre in Mexico City.

Mesa mayor, John Giles says: “Consumers in Latin America want the ability to purchase goods online and receive them the next day – SkyBridge Arizona will make that a reality.

This project will transform Mesa into an international e-commerce hub, benefitting not only our city but also our state and the Arizona-Mexico region as a whole.”

All required documents, inspections, tracking and other services will occur on-site in Phoenix, with Customs Processing status following packages and cargo electronically to their final destination in Mexico and eventually further into Central and South America.