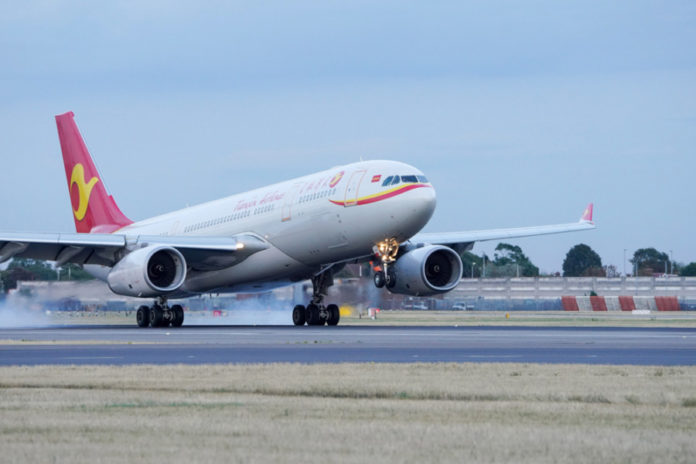 Heathrow Airport is continuing to gain links to China with services to Chongqing, the airport’s 10th direct connection to the country.

The thrice-weekly service is operated by Tianjin Airlines on Tuesdays, Wednesdays and Saturdays using an Airbus A330-200 offering 3,744 tonnes of cargo capacity for imports and exports per year.

Chongqing is the most populous Chinese municipality, and is part of the West Triangle Economic Zone, which includes Chengdu and Xi’an, contributing to nearly 40 per cent of Western China’s GDP.

Heathrow chief commercial officer, Ross Baker says the airport is pleased to welcome its 10th direct connection to China, saying: “Heathrow is proud of its role as the UK’s Hub airport and biggest gateway for Chinese passengers and cargo going between our two countries.”

He adds: “But we have much further to go, and now that Parliament has voted unequivocally in favour of Heathrow expansion we will ensure London, and the UK, become the destination of choice for Chinese trade, tourism, and investment.”

Last year, services to China via Heathrow contributed £510 million to the UK economy, supporting up to 15,000 jobs according to Frontier Economics.

Cargo volumes to and from China from Heathrow increased more than 10 per cent to 137,000 tonnes, but the airport is still missing out on connections to important Chinese cities.

This year, Heathrow has gained links to Wuhan, Sanya, Changsha, Xi’an and now Chongqing, but does not have links to Chengdu, Hangzhou, Kunming, Nanjing, Shenyang, Tianjin, Urumqi and Xiamen.