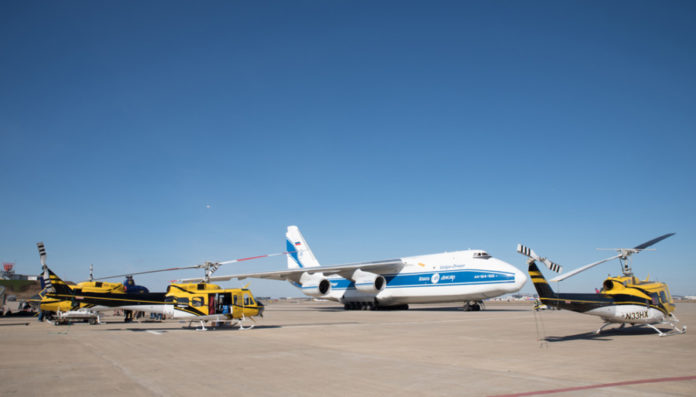 Volga-Dnepr Airlines was called upon to deliver four helicopters to fight wildfires plaguing the Chilean countryside.

Helicopter Express, contractors to the US Forest Service and the Department of Interior, called upon Volga-Dnepr to transport three Bell 205 helicopters, a K-MAX 1200 helicopter and a flatbed truck and trailer, on an Antonov AN-124-100 from Atlanta to Santiago.

The Antonov was able to touch down at Hartsfield-Jackson Atlanta International less than three hours after the helicopters arrived at the airport for the 11-hour flight to Santiago.

Using the AN-124-100 meant the helicopters did not need dismantling other than removing the rotor blades, meaning they could commence operations almost immediately on arrival at their destination.

Volga-Dnepr key account manager aerospace, Peter Baldauf says: “This was a case of two companies that are experts in their fields of operations joining forces to provide a fast solution to help the Chilean government tackle the wildfires in central and southern Chile.”

“Although we regularly carry helicopters, including in the past to fight wildfires, this was the first time we have had the pleasure of working with the team at Helicopter Express so it provided us with an opportunity to demonstrate our capabilities.”