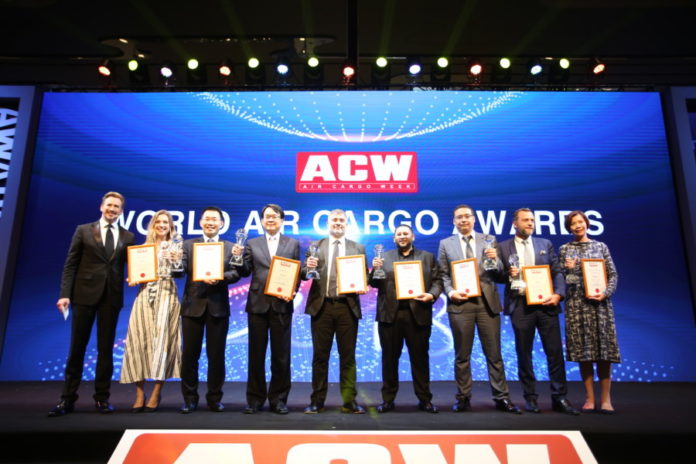 The stars of the global airfreight industry gathered on Thursday at the Jumeirah Himalayas Hotel in Shanghai to honour those companies that put the customer first, meaning they grabbed the winner’s trophy.

Nine categories were up for the popular vote from individuals in the worldwide industry. After being verified and checked, the results remained a closely guarded secret until the first one was revealed. After a worldwide boom year in airfreight in 2017, much interest was felt in which companies would cap the business boom by walking away with one of Air Cargo Week World Air cargo’s 2018 awards.

Earlier, a birthday cake was ceremoniously cut by all Azura International staff attending the event to mark its publication Air Cargo Week’s 20th anniversary. Staff had come up onto the stage to share with its many readers present their delight in having successfully produced the world’s only weekly airfreight newspaper for two decades. Air Cargo Week editor, James Graham says: “These awards are truly coveted by the worldwide airfreight industry. Each company that becomes a finalist can take pride in that fact alone. To reach such a position requires a special intent; it means that your peers have voted for you in large numbers.

“Of course, in an awards ceremony like ACW’s, only one company can walk off with the award. However, those that do not make the grade on the evening can still take an enormous pride in getting as far as they did.

He adds: “Of course, those who pick up an award must keep up their standards if they want to retain it. The other finalists have will always have another chance to win their own coveted ACW World Cargo Award next time. Good luck!”

Airfreight Forwarder of the Year: Dimerco

IT for the Air Cargo Industry: BRUCloud