Miami is the only North American airport to be designated a pharma freight hub by the International Air Transport Association (IATA), having organised nine of its logistics providers to undergo the Center of Excellence for Independent Validators (CEIV) in Pharmaceutical Logistics program.

So far Swissport, LATAM Cargo, Kuehne + Nagel and Amerijet have all achieved certification.

Amerijet plans to expand its operations at Miami in 2018 with two weekly freighter flights between Miami and Brussels, the world’s first two IATA pharma hubs. 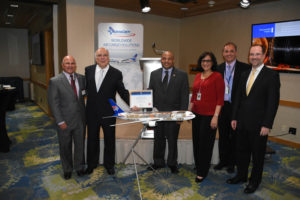 Miami-Dade aviation director, Emilio T. Gonzalez says: “Thanks to hub partners like Amerijet, MIA’s pharma trade has grown 140 per cent in value since 2010 to $4.4 billion in 2016. Our pharma hub initiative, combined with our extensive global network, continues to broaden MIA’s already sizable economic impact in our community.”

Amerijet president and chief executive officer, Vic Karjian says: “This certification reconfirms our commitment to offering the highest consistent quality, professionalism and transparency to our customers.”

“Being the first all-cargo airline from the US to receive the CEIV in Pharmaceutical Logistics is a direct result of hard work and the investments we have made over the last few years to our Temperature Controlled (ATC) program.”

It became one of the first six US cargo hub airports in 2016 to launch the e-AWB 360 campaign, a global effort to eliminate printing costs, replace manual data entry with a more efficient and reliable digital system, and pave the way towards a completely e-freight cargo industry.