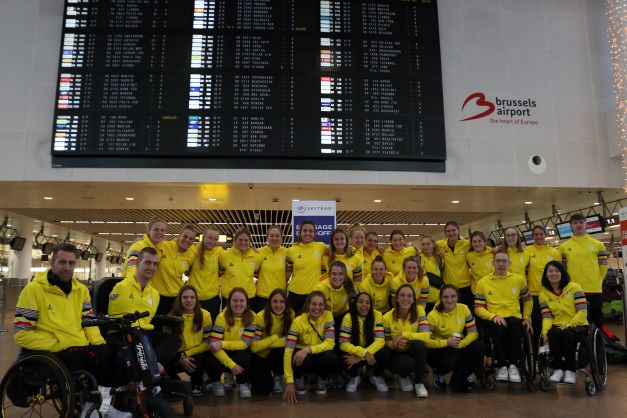 Sport has always had a special place in the heart of Brussels Airport, which regularly welcomes top sportsmen and women at its terminal and supports several Belgian sports federations and events. Brussels Airport has therefore renewed its support for the Olympic Committee, which it has already been sponsoring for several years. This year and next, Brussels Airport has decided to also support the Belgian Paralympic Committee and its paralympic athletes. These are two sports federations whose values it shares, making use of the opportunity to excel and to inspire Belgian society through their performance.

“We are extremely pleased with the renewal of the cooperation with Brussels Airport. The airport is an important place for athletes, as it is often the starting point for their journey towards international competitions. The excellent services and facilities contribute to an optimal preparation and serene mind-set in the final straight,” Cédric Van Branteghem, CEO of the BOIC, said. “The fact that Brussels Airport want to extend this partnership towards the Paralympic athletes shows once again their commitment towards the Belgian athletes community. We would therefore like to sincerely thank Brussels Airport for their trust, and we look forward to our continued partnership.”

“We’re thrilled to join this partnership and thank Brussels Airport and Team Belgium for involving us in the extension of their collaboration. Brussels Airport is an important stopover for our athletes on their road to competitions, so being able to count on the support of a partner in this journey is a great added-value. Even more so for the members of Paralympic Team Belgium, who often have very specific needs in terms of accessibility,” Olek Kazimirowski, Managing Director of the Belgian Paralympic Committee, added.

This two-year partnership will enable to support and encourage the athletes during their campaign at the Paris 2024 Games. These Games are organised with a focus on sustainability by halving the emissions linked to the organisation of the event and by offsetting more CO2 emissions than will be emitted. Brussels Airport has also been working on reducing its CO2 emissions since 2010. The transition to being a zero carbon airport is an integral part of its new Shift 2027 strategy.