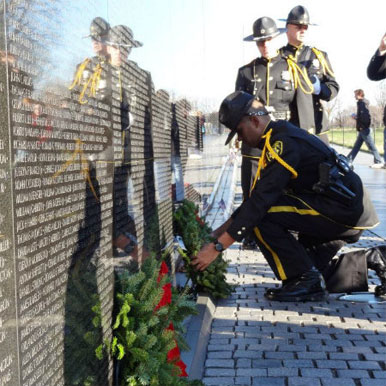 For the second year in a row, CEVA Logistics is helping US-based non-profit organisation, Wreaths Across America, deliver wreaths to Europe to honour fallen US military service personnel.

It has always been a dream of non-profit Wreaths Across America’s Founder, Morrill Worcester, to place a wreath in honour of every US veteran laid to rest around the world. To breathe life into his dream, CEVA Logistics has once again partnered with the organisation to help advance its mission to ‘Remember, Honor (sic) and Teach’. Its aim is to honour those who serve and to teach the next generation about the value of freedom. As part of the CMA CGM Group, CEVA Logistics is committed to sharing CMA CGM’s strong humane and family values in its everyday actions.

Worcester Wreath Company, Morrill’s family-owned balsam farm and wreath-making company from Maine on the US-east coast donated 14,000 veterans’ wreaths for the effort. The wreaths were loaded on planes bound for Europe from three US hubs – Houston, New York City, and Washington, DC – to accomplish the task, CEVA partnered with United Airlines and Cargolux Airlines.

“It is important to honour and recognize the lives of the US veterans all around the world,” said Jérôme Lorrain, CEVA Logistics, managing director of North America. “This initiative from Wreaths Across America is a powerful reminder never to forget the sacrifice it took from those who risked their lives for freedom.”

In Morrill’s own words, accomplishing his goal will “change the country’s perception of the military, educate generations to come, give our veterans their due, and be the most valuable history lesson.”

Adds Wayne Hanson, chairman of the board of directors, Wreaths Across America: “This is the second time CEVA has stepped forward to help us advance our mission overseas. They were also instrumental in our placement of veterans’ wreaths at Normandy American Cemetery in France last December. Their entire team has donated time and energy to this project. Their expertise and support have helped make this all possible.”

CEVA will additionally be participating as a sponsor in laying wreaths across the United States in honour of the fallen heroes. These will take place at more than 2,000 participating locations.