Air cargo is clawing back lost pharmaceutical business to sea freight as investment in specialist services to handle the changing and complex needs of pharma shippers begins to pay dividends.

Airfreight is going through challenging times due to the instability of the world economy and slowdown in Asia, but one of the bright performing markets in the industry is pharma.

The shift back to air cargo was detailed by the International Air Transport Association’s (IATA) cargo manager for Western Europe, Francisco Rizzuto, in Milan (Italy) on Tuesday, 15 September at the Alha group’s unveiling of its new PharmaZone (pictured) at Milan Malpensa Airport.

Rizzuto explains IATA forecasts growth in pharma moved by air will be 12 per cent until 2018, up from the six per cent growth achieved from 2008 to 2013.

The industry’s share of global pharma products transported has plunged since the turn of the century. In the year 2000, air cargo had a 17 per cent share of the market as the pharma industry relied heavily on the industry for its speed and efficiency, but by 2013 it had declined to 11 per cent.

Pharma shippers moved to sea freight as they were unhappy with the costs from lost, scrapped and returned products and the lack of compliancy and standardisation across the air cargo supply chain. 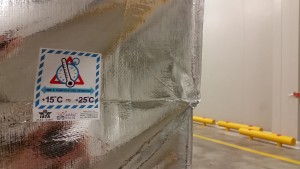 Rizzuto explains much of the complaints from pharma manufacturers in his experience were about the cargo handling part of the supply chain.

But things are changing and airlines, cargo handlers and freight forwarders are all ploughing investment into specialist pharma products and services to meet shippers’ needs, backed by IATA’s Centre of Excellence for Independent Validators (CEIV) Pharma certification.

Alha is the latest to invest and unveiled its PharmaZone at Milan Malpensa on Tuesday. The cargo handler was awarded the CEIV certificate for the facility, making it the 15 globally to be CEIV certified.

Alha general manager, Alessandro Cappella, says: “Alha wants to give an effective response to the needs expressed by the various stakeholders in the air cargo market: shippers, forwarding agents, airlines, with the specific intent to offer a more and more relevant service to the needs of airport users (in line with the European and international community standards) for a continuous development of airfreight traffic.

“It is now a concrete fact that air cargo pays particular attention to this type of product (pharma), where more and more frequently, and with greater volumes, aircraft bellies are used for pharma transportation.”

Alha’s PharmaZone covers 600 square metres and can handle products from two to eight degrees Celsius and 15 to 25 degree Celsius. It is part of the 4,000 square metre Alha Cool Centre at Milan Malpensa. The firm’s pharma manager, Nicola Caristo, says it will be a “pharma hub for Southern Europe”.