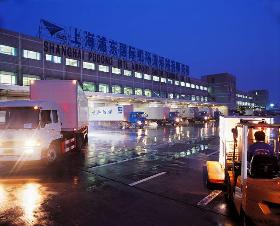 Shanghai Pudong International Airport Cargo Terminal  (PACTL) has seen a 12.4 per cent rise in the amount of cargo handled in June, despite a drop in domestic cargo handled.

However, PACTL handled 6,971 tonnes of domestic cargo in June, a drop of 1.8 per cent over the same month of 2013. This is also down from this year’s high in January when it handled 8,983 tonnes. PACTL splits domestic and international cargo into inbound and outbound. Inbound rose six per cent to 3,647 tonnes, but outbound fell 9.2 per cent to 3,324 tonnes. This was a smaller drop than in April and May, when outbound cargo shrank by 14.1 and 17 per cent, respectively. International cargo rose by 13.4 per cent in June, rising to 114,207 tonnes. PACTL’s international inbound and outbound data shows a rise of 4.3 per cent and  19.3 per cent, respectively. The large outbound international tonnage increase took it to 72,487 tonnes.

Vice president of PACTL, Lutz Grzegorz, says, “We are confident of setting a new record by the end of this year and reaching a figure of 1.4 million tonnes of air cargo for the very first time.”